First let me say that in my opinion, every problem this nation faces was CAUSED BY GOVERNMENT.  If you think Medicare is a wonderful govt. program that works well, guess again.  Those old enough may remember how cheap medical costs were before Medicare.

Now we have this putz, Barack Hussein Obama, that is manufacturing crisis after crisis.  First he refused to release his records, birth certificate and college transcripts, then it was debt ceiling after debt ceiling, hundreds of millions to failing green companies, the BP oil spill which was totally mishandled, high unemployment with false govt employment stats, tax hikes for the so called wealthy, sequester, proposed by the boy himself, even though he is now distancing himself from it as far as possible, Egypt, Libya, Yemen, Pakistan, Syria, boots on the ground in Africa, while Americans were out of work, pushing through unwanted healthcare, the tax hikes, astronomical budget deficits and debt he wont even try to fix, threatening some that have some recognition with threats for saying the sequester is Obama’s doing, including Bob Woodward of Watergate fame and Clinton dinosaur, Lanny Davis, Newtown and gun control, which could trigger a revolution.

Obama is going to make sequester as painful as he possibly can and the media will back him up.  There is even a story out that the Obama administration is fearing assassination by the military.  Will he do a false flag assassination attempt on his life?  In Israel, 1992, Yitzak Rabin tried that without too much success.

This is crisis management, jumping from one fire to the next, many of them the govt’s own doing.

Please do not copy/paste.  Take an excerpt and re-blog.

I don’t give a rats ass what you traitors have done, who you fought.  All of your fights have been in vain, now.  HOW DARE YOU!  You just want to keep your pension plans.  Who’s kidding who??  You couldn’t have paid my Grandfathers and uncles who bled and died for this country millions of dollars to sell our Constitution down the river.

The 2nd Amendment was written to keep the 1st Amendment intact.    If you don’t have your guns, you do NOT have free speech, you f’king leftists.

Click:   RON FOURNIER: YEAH, I GOT THE ABUSIVE TREATMENT FROM THE WH AND THE SAME ‘YOU WILL REGRET THIS’ THREAT

by Ace Of Spades

A bunch of links:

Lanny Davis, that mush-mouse!  He is like the ultimate marsh-mellow man! If they are threatened by him, they are REALLY runnin scared!  Look at all of this OBAMA-GATE! All over the place! And, we will NEVER hear about this from the MSM!!

WASHINGTON — Bob Woodward isn’t the only person who’s received threats for airing the Obama administration’s dirty laundry.  It seems anyone is a potential target of the White House these days – even former senior members of the Clinton administration

THEY THREATENED ME TOO!

I am SICK of these people.  SICK OF IT.   Stop having faith in these liars.  Turn to God, he has the truth.  This is not a true conservative type person at all.  He is a psychopath like Obama.  Plus, we’ll go birther on him as well.. His father was born in Cuba. Looks like he wants WW3-same as Obama. He is NO different!!

THIS IS A VERY SERIOUS THING, PEOPLE.

I just read that emails were revealed about the threat that Woodward received from “Gene Sperling.”  We know they lied: “Obama White House Denies Staffer Threatened Journalist Bob Woodward – Emails Released”    OK.. Can we please have more?  It’s too late for them to kill you, Bob.  If they kill you, everyone will know that they are already what we suspect: MURDERERS.

So, can you please take courage?  I am begging you. And, can you please ask God to give you more bravery to start demanding this imposter’s impeachment?  End the suffering before it begins.  You already know Russia is getting prepared to nuke us.  It’s bad enough to have someone on the outside who wants to kill us all, but to have enemies within at this time in our dark history is really all too much to bear.

Can someone tell me when you even heard the use of the word, ‘sequestration’, before Obama?  Anytime we hear of some new term, you can bet your bottom dollar that Obama and the left-wing, “Progressives” invented the word to use for ‘such a time as this’.

Political-correctness is not an American ideology by tradition. So, of course it did not come from Americans that are trying to do things right. Most definitely, Obama started bringing this ‘cuss’ word to our attention..

These traitors in both houses act like this is ‘new’.  Well, it’s not.  I know what I am telling you is the truth because the state-run media, NBC – is Blaming ‘American Public’ and Republicans (Wow, shocked?) for Sequester.

There needs to be no further explanation.  That link explains where the “F bomb” sequestration word originated; THE LEFT WING & OBAMA.  The real word/s they fear is spending cuts.

Just the other day, Assad’s government released a video saying that they were going to sit down and have talks with the Jihad criminals in Syria.  We should have let them be; Assad knows how to handle this insanity, the US can’t even handle its own mess.  Now, we have fruit-loop, idiot, John Kerry saying that the US will support the Jihadists.

Well, I warned Americans. QV warned our people that Obama is a Muslim/Marxist and would keep doing this.  Did any stupid, liberal, vomitous, slobs listen? NO. WHY? They LOVE war and WANT WW3 with Russia. They ADORE Jihadists & LOVE turmoil.  Leftists and the pseudo-conservative filth just want war, war, war.  And, we have no money for war.  We can’t even fill up our Navy ships with oil because we are bankrupt.

Russia says they will engage in a nuke war against the US if we don’t stop this crap.  Does Obama listen?  NO.  See for yourself:  IMPEACH OBAMA: Russia Threatens Nuke War Because Of This A$$HOLE

Get prepared, American people that are SANE.  War is coming.  I don’t know when… But look for bombs, rockets and nukes in America–that IS our future..And, its sad to say; We deserve it. (As a whole)

Democrats Should Run David Duke For Pres. In 2016-The Liberal Jews Will Vote For Him

Everything is koo koo, Now…Anyone else notice that insane folks seem to hate the people of Israel?

Chuck Hagel got the nod for the SOD, yesterday.  Liberal Jews voted for Obama, 69% in 2012.  Obama is a Muslim, who hates Israel and appoints Jew-hating, anti-Christian jackasses..Samantha Power ring a bell??  So, what’s the real difference between Duke and Hagel?  I see NO difference.  White Supremacists LOVE Chuck Hagel.  Chuck Hagel hates Israel.  So, why would it be any different if Duke ran for Pres on the Dem ticket, 2016?  Liberal Jews would help his campaign—as long as he is a Democrat.

Hell, Why doesn’t Obama just adopt Duke on his staff? They are on the SAME page.

David Duke endorsed Charles Barron for a seat in NYC: (A Jew-hating, white-hating, America-hating, Israel-hating, black bastard) I am sure that more than a few Lib-Jews helped that idiot.  The Neturei Karta are Socialist ‘Jews’ that hate Israel.  Duke hates Israel.  Neturei Kartas hate most true, Torah-abiding Jews, as does Duke.  Duke is always attacking religious, right-wing or conservative Jews….Ditto J-street, Jewish Daily Forward, Mondoweiss, etc..   In fact, Mondoweiss hates Zionists and believe we have “ZOG” (Zionist Occupied government)  So does David Duke!!  Which we don’t & I am right, again…  Hagel is 100% proof that Zionists are not in charge at all.   -By the way; One cannot be Commie/Socialist and Torah abiding, you fool Neturei Karta’s-   Duke hates Christian-Zionists, so do all of these moronic, aforementioned ‘Jews’.   Duke supports Muslim, Islamic Jihadists, as do Lib-Jews & Neturei Karta kisses their ass as well..

David Duke, 2016 on the DEM ticket. Why not?  Makes sense in a world gone insane.  People who hate America’s allies seem to be the “IN” thing, now. 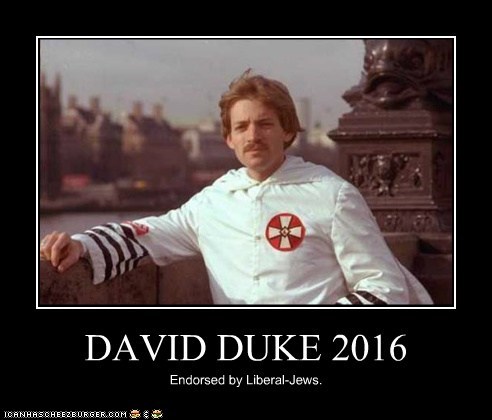 Streisand should sing “Somewhere” at his Inauguration: 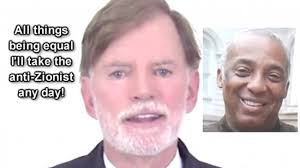 Ya Can’t Make This Sh*t Up!

God does not change.  “I will bless them that bless thee (Israel) and curse them that curse thee (Israel).”   True faith individuals love and support the PEOPLE of Israel.  We know their government stinks, but God does not ask us to support government.  He asks us to support PEOPLE and discern if they are holy or righteous.  Most Israeli Jewish & Christian PEOPLE are right-minded.

The REAL Reason RINO Chris Christie Was Not Invited To CPAC: They Could Not Afford To Feed A Planet

Fat-man is the epitome of ‘liberalism’ in every sense of the word…Fatso.  Sell-out.  Chow Down wide load.

I hate this phoney-bastard.  Chrissy…You’re so fat when you went to school you sat next to everybody.  If you went on a diet, two undeveloped nations would have enough food to eat for a year.  You’re so fat you wake up in sections.

Where is Ann Coulter?  She has not said anything about fat-boy. Coward.. I think the snot had a crush on him.. Grossssss.  Boom, bada boom, bada boom..  Ok, enough.  He’s a sell-out.  You people in NJ need to pray that the planet-man  will go into some other orbit where he will have sprinkles from milk-shakes as his milky way. Hamburgers as his personal moon.