..Nothing ‘beneath the Matrix’ for me at this point.  Feeling crappy.  I had about 5 viles of blood taken today, breath tests to see if my stomach is OK.  They even want a stool test. OMG. Grosssss.  EKG, thyroid tests, vitamin tests to find out why I am seriously exhausted. I am super tired and the hormones are working in the opposite direction: I thought I would become a little over-sexy. NOPE! Thats all the same, still the same ol prude. It’s the thyroid, of that I am almost sure. Could be low sugar diabetes. My Nana had that. But, my Mom has serious thyroid issues.  It’s my ethnic Heeb/Jew thing (Sephardic) to feel like shit after 45 or so. 😦  That’s why I had a make-over last week; to make me feel better..

ANYWAY-some of you have emailed moi. Called me, etc.  And, I am just too tired to really correspond. I am so sorry.  Please forgive me.

At any rate, here we go with one of my fav songs (NO, NOT ‘great singing, but a good message)  “Shout” Tears For Fears.. Just because I don’t feel well, I won’t miss a chance to SHOUT.

God Bless ya ‘all. Shabbat Shalom to my Homie Jews 😉

Let me be clear.. ANY “Jew” that supports gun-control – absolutely, without a shadow of a doubt is an inward psychopath that would endorse Hitlers gas chambers. They would shout for joy if there really are FEMA camps set up by wannabe tyrant, Barack HUSSEIN Obama.  Maddening. Frightening. Self-loathing.

The other day, I tried to advise another self-hating Jewess, Rebecca Shoenkopf that the politics she endorses and enforces are Nazi.  She refuses to see this because she is a Commie. (Ya can’t make this shit up) re. our people, my half brothers and sisters- the Jews.  Just because the left-wing politics are not 100% Nazi does not mean it ISNT Nazi-like – because it is.  The racism is there (black on white) as we see here with many of my husbands posts on black on white crime.  The Jew-hatred is very evident as we have seen at many of the college universities complete with anti Zionism and the oppression of Israel friendly, patriotic Jews.  Anti-Christianity is an epidemic now within the left- wing mantra.  In fact, the anti-Christianity is so disgusting that the left-wing pigs SHOVE homosexuality on Christians that are against it.  Talk about fascism.

Now, the 30% well meaning Jews have this idiot David Sirota we have to contend with – who is saying today,  that Conservatives are supportive of NAZI gun-control laws.  In my opinion, this is defamation against Christian conservatives and should be called out BY Christians.  IF there is a ‘conservative’ that supports an anti-2nd Amendment stance, he/she should be advised to join the Commie-Nazi cabal of anti Americanism, expeditiously.

Here is the madmans post: Conservatives support background checks, too!

Let’s take a look at the “Jew” Sirota and his Wiki page:

Sirota was born in New Haven, Connecticut but grew up in the Montgomery County suburbs outside of Philadelphia, Pennsylvania.[1] After being educated at theWilliam Penn Charter School, he went to Northwestern University,[1] where he earned his bachelor’s degree with honors in journalism and political science. He has lived in various cities around the country including Philadelphia, Chicago, San Diego, Washington, D.C., Helena, and Denver.[2] He describes himself as “a Jew”

I would not have brought up the fact that he is a “Jew” unless he said it first.  This type behavior must be confronted by God-fearing Jews, ASAP. He should be excommunicated from the Jewish community for seeking to be seditious against the country he is in exile; America.  Maybe he should move to Gaza and help destroy his own people – since this is how gun-control always turns out for the Jews, ANYWHERE, anyways..

David Sirota needs a reminder of how America will treat certain Jews that are seditious when they catch on to your trix:

Americans WILL end up holding the Jews to a higher standard because the Jews are SUPPOSED to be God fearing, God lovers & Country patriots. It is in the Tanakh, it is in the Torah to do so.

WE ALL WANT THE OBAMA ADMINISTRATION TO JUST GO AWAY, BUT YELLING AT FRIENDLIES ON TV LIKE THIS IS A NO NO.

I am so sick of this nasty, little freak, Betsey O’Reilly.  Kirsten is probably one of the only decent Liberals in America.  AND, she is coming out of the Commie brainwashing.  At least this jackass could be nicer to her.  She is trying to get the most facts out – about what happened with the IRS and Shulman visiting the WH 100,000x.   Can you imagine the fire this poor thing comes under for standing on the side of what is right?  You know how shitty the leftist cabal is.  They are friggin ruthless, inhumane and downright evil.   This gal needs encouragement. AND, hopefully she will not turncoat like Juan Williams.

Kudos to this gal.  It CAN’T be easy being a Lib and standing up to these Bolshevik Nazis.

Also, I am not a real big Alex Jones fan, but last night, O’Reilly had a video that featured Jones yelling and while he [Alex] was yelling, O’Reilly was talking about ‘hate speech.’ Subliminal crap..  Alex is a little weird, that’s true, but he is not a hater.  Who cares if he is??  People bled the ground and died so that Alex could have freedom of speech. O’Reilly, go take some happy pills or anti depressants. People are SICK of you.

Does Anyone Really Care That Mike Bloomberg Was Sent Poisonous Ricin? Because I Sure Don’t

Some uber, left-wing, anti-2nd Amendment moonbats are saying that Bloomberg was sent ricin because of  his anti-gun stance. Like the NRA did it, or some shit like that.. I disagree.  I believe that someone sent this jackass poison from the Coca Cola Zombie crowd. Kudos to the Coke-ie folky.  Who really cares, anyway?  He’s a small man with a Napoleonic complex.  A nasty, whiney bastard that acts like a little girl.  I don’t even understand why some Mafiosa hasn’t taken this sob out yet.

I hope the dictator of NYC, Bloomberg gets slipped ricin in his next glass of 1987 Chablis.  Good riddance to bad rubbish.

I’m SICK OF THESE CONTROL-FREAK WACKOS.

This is Obama’s white-hating America. How will this work for white Commie/left wingers? Hopefully, La Raza will kill off every last white liberal by taking all of the jobs that are supposed to be American jobs in the Fed govt….

CHANGE WE CAN F*CKING BELIEVE IN

La Raza, whose name translates to “The Race,” will sponsor a workshop to help members fill jobs in the Senior Executive Services (SES). These are special management positions with salaries often exceeding $200,000 in cash and benefits annually.

By the way..This is La Raza:

If I was in charge….La Raza and its allies would be spitting blood. Dead, as in NOT living.

(You can click on the pic for a larger poster, Becca, made just for you.)

If this isnt marriage material for an uber, far-left wing, Marxist, Liberal-schmuck – or a metro, pussy-boy- I don’t know what is..

So, we have to leave off on a good note with miss Becca – the epic drama queen & attention whore extraordinaire from Wonkette..  Someone please, man or woman, please, I’m begging ya:  Take this hag out of her misery..

Find a man, Becca and cook some dinner…(That’s all most women are good for anyway.)  Well, Liberal Jewish women are not really even good at that.   On the other hand,  they’re very good at opening their big mouths (Don’t get excited guys, not that type mouth…)  Think Debbie Wassermanshitz *Gag*  We can always use Becca’s mouth for garbage consumption.  Meanwhile, know your damned role, woman:  go clean something.   And, for Gods sakes, biotch… don’t pro-create..

Hey Sam Elliott…I’ve got a Liberal Jewish wench for ya.. Likey? 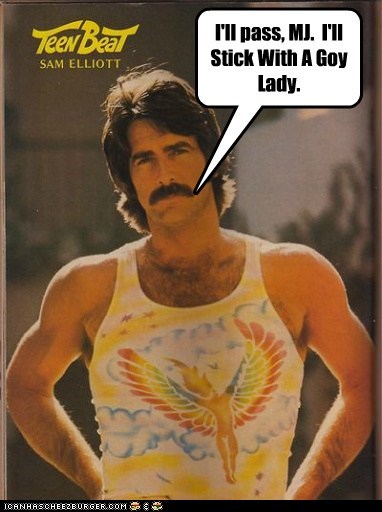 Bye “Liberals”, U pro-NAZI pigs. Don’t let the door hit ya where the good Lord split ya.

I imagine that Broadway must have been a fun place at one time.. Where TALENT was actually allowed to be onstage and preferred.. The days before fake equality came along.

At any rate, this was fun to make, I manipulated this one about 2 mos ago..
Here’s a song for ya all:  (Love this song)
–
Love,