This was the most vivid dream I have had. (I woke up at 4:30 AM from this dream–right now)  Please pay attention.  Dreams are, (or can be) warnings.  In Joel, God promises in the end ages that he will pour out his spirit on ALL flesh. People will dream, folks will have visions, etc. 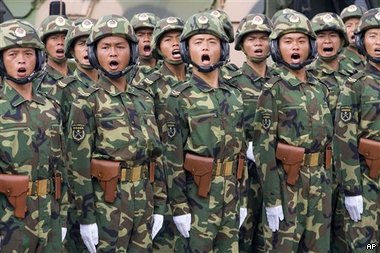 Here is the dream:

Americans, blissfully unaware were going about their hum-drum day.  Meanwhile, The US Govt was building up propaganda against Russia, China and other Asian nations.  These said countries had enough of the lies.  All of the sudden (I was in a large city), HUGE jets, aircraft (you name it) which were foreign were flying across the sky–it was so loud.  I looked up–I instantly knew what it was. Payback for our wars.  I knew it was invasion.  I saw thousands upon thousands of Asians & others.  They were piercing Americans through the stomachs.  They spoke perfect English.  As they pierced this American woman, a female Asian looked at the woman and started laughing.  She said: “YOU ARE NOT A WOMAN! YOU LOOK LIKE AN UGLY MAN!”  The lady underneath the sword was pleading for her life and the Asian just killed her. I looked at the dead female, I knew instinctively that she was a militant LGBT and I actually couldn’t care less if she was dead.  She was deserving.

As for me in the dream, I was laying by 2 dead people. Feigning death.  Time had gone by and this Asian person had made friends with me.  He knew that I was anti war (Meaning I am anti wars (Led by America) all over the planet) and he liked me as a friend.  I asked him how I could stay alive.  He was friends with top brass in his military.  He had told me that he advised them of who I was.  But, for me to always feign death. He now had to leave and we said Good bye to each other.

Much time had passed–Then, I was under a bridge-so many people dead all over from bombs, fires, etc..  I was looking for another place to hide, but I knew there was NO hiding place. I sensed that the invader was coming my way but I had moved.  So, I pretended I was sleeping and dreaming.  The soldiers were females that had proceeded toward me.  I pretended I was talking in my sleep.  I was saying in my feigned sleep:  “I am so sorry Syrian and Serbian mothers for what America did to you.”  All of the sudden, I felt a hand on my forehead, soothing me.  The soldier lady had felt my remorse of America’s great sins against countries.  She let me live and they walked away.