Here are some animated gifs I found on my Tumblr:

And, a Youtube:  It was HARD to find a good song to go with a MM tribute! Mr. Owl is back for his little bath.. He’s such a nice, clean little owl.

He is getting all spiffy and ready for a night out on the town! A real night owl….

Good morning… Some happy animated for ya folks.. These type things keep my mind off of surgeries, news, WWIII, Obama, etc..

Having some coca cola!

You know…it saddens me that I can only look to America’s past for beauty, charm and grace.

Just so you know…I entertained Kim Novak at the Forest Theater in Carmel, while playing Annie Oakley in “AGYG” in California in 1988.  She LOVED my show and came back to specifically compliment me for a half an hour.

Naturally, they will have the epic mindless morons of the 21st century following their idiotic drivel.  Hollywood, now, is just violence and sex.  It is not respected, liked or thought of as anything but a machine of Marxist propaganda.

See the Tweets of the young and the useless: Here..  The youth have NO clue what it is to get older.  It SUCKS.  They do not teach you how to get older in American indoctrination classes they call ‘school.’

Kim Novak was a BEAUTIFUL young woman, who was a GORGEOUS middle aged babe.  I only hope I can age as graceful.  By the way: She just survived breast cancer.

She is 80 years old, now.. What the hell do people expect her to look like?  Friggin sick putz’s. Making fun of the elderly is as low as one can go. Shame on the youth of America. How heartless. Is this how these jerks treat their Mother and Grandmothers?  God HELP them.

I bet if Kim was an older black woman…..

they would be WORSHIPING her!

There is a lot of talk about giraffes.  The Danes are mistreating their giraffes & other animals: Thousands of zoo animals killed in Europe yearly

We are not supposed to hurt animals.  We’re to treat animals with care.  Humans were given dominion over the beasts of the fields.  Why?  Because, God, in his infinite wisdom gave man dominion.  He believed that mankind could take care of animals.  Since God gave this great responsibility to man, should not mankind respect this position?

When I see suffering inflicted upon animals, I just about go nutty and can’t sleep.  Shame on the Danes for this.  Obviously, the animals that are entrapped should be sent to the Buddhists.  The Buddhists can care for them until strong enough to make it on their own, then set them free.

One Of My Favorite Actresses, Joan Fontaine Has Passed Away

Joan Fontaine was a very ladylike dame.  Something that is missing in today’s society of sexual depravity.

Believe it or not, I have performed for Joan Fontaine.  She lived up in Carmel Highlands in the 1980’s.. I also lived up there. Ms Fontaine lived about 6 houses down the mountain.   She has seen me in several different theatrical productions.

At any rate, I always thought that Ms Fontaine was an excellent actress.  Not in the same glamour rating as Vivien Leigh or Heddy Lamar, but she had a sweet quality that was genteel.  My favorite movie she acted in was “Rebecca.”  I also admired her acting in “Suspicion.”   What woman wouldn’t like watching a movie with Lawrence Olivier or Cary Grant.. 😉  She made a great ingenue for Judith Anderson’s strident foil role of Mrs. Danvers in “Rebecca.”  Anderson acted with prowess that earned her an oscar nod in 1940. (When the academy gave awards for actual mummery)   The 2 acting opposite each other in Selznick’s sensation, Rebecca has most assuredly earned the title of “classic.”

Thanks for always keeping it lovely, Joan Fontaine.

We went a little while back.  but, the slide show I made is gone.  So, for your entertainment… (One of my all time fav movies)

OK Corral billboard on the way in: 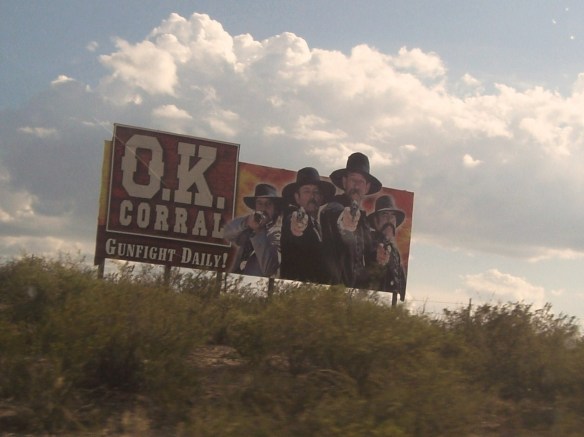 Remember the scene in the movie of the theater?  Just like that in real life:

Painting of that belly dancer in the Bird Cage:

Tha, tha that’s all the pics for now, folks…

We’re losing all of these great people from the WW2 era.  Makes me sick and sad.  The best of our once great country is gone with the wind with every last breath these fine, tough people breathe.

One thing I can always count on when I make a short tribute about a lady star from the golden age who has passed away: They ALWAYS looked lovely and feminine.  This is something that is missing from todays society of feminist moonbats and scantily clad sluts.

Bye Esther, you rocked, lady!  You were so lovely. Thank you for making us feel good–to this very day..