@txgforever @ron_fournier There is NOTHING that O can do to repair damage. He is scandal plagued and should resign.

….Yesterday, it was released that a major Democrat can’t take Obama anymore.. NO way.. Barack is the chosen one, the Emperor, King and most high.. He can do no wrong.  He is the great black hope for ‘evil’ white America.

If Obama is tired, RESIGN. Go to Kenya, we’ll pay for it.  Anything, just get lost. You’re a horrible, wretched monster.  EVERYONE in the world hates your guts, you spoiled man-child!

A Democratic House member whose endorsement in 2008 helped lift the Obama candidacy told me in January, “He’s bored and tired of being president, and our party is paying the price.”

This is the only Tweeter responding to Fournier that has his head on:

@ron_fournier It was all intentional, Ron. This, the border crisis with Fed dumping, the VA mess, is all designed to overwhelm the system.

Treasonous Obama Freeing GITMO Terrorist. Why Is The Military Following His Orders, Anymore?

Why is the military following the orders of a terrorist ‘leader?’  Why don’t the top generals march in and place him under arrest AND his whole administration?

The main stream will do nothing, say nothing about this.  They will not enforce his impeachment, either.  They will not touch America’s first black ‘leader’ and you’re an idiot if you think they will..

Of course the release of another terrorist will make Liberals ecstatic.   In my opinion, Obama is doing everything he can to agitate us to begin a civil war.   Of course, I am not going to try to stop anyone if men do start war,  but do know that this is his whole life story:  Starting a Communist revolution.   My husband believes Obama may be insane.   I do not.   I believe that everything Barack Obama does is calculated and nefarious.

Obama to free Gitmo terrorist ‘because he took up yoga’ and wants to start a ‘milk and honey farm.’  Hell, why not?  Let’s just give him a million bux..  After all:  The Taliban is using weapons supplied by Obama’s State Dept.  Makes sense in our insane world…

Judge Jeanine is the only man with cojones in America:

Commie (Liberal) Activist: Obama Has To Use Exec Orders Because He’s Black

Pardon me, but its time for the Negro to go.  Pastor Manning would agree.  The affirmative action president is a failure.

This Is Who DNC/GOP Want To Give Amnesty: Mexican Theives Who STEAL Your Target C. Cards/Info 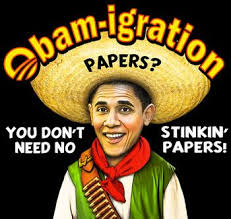 Now, do some of you understand why I friggin hate “Liberals” guts?  You really can’t blame the thieves because these robbers are enabled by white, liberal, left-wing drek. NO amnesty.  Not now, not ever.  IF they grant amnesty, we need to go ‘hang em high’  just like Florida candidate who said:  ‘I’m Past Impeachment. It’s Time To Arrest Obama And Hang Him High‘. Yeah, Obama and the leftists in both parties.

And no, I don’t give a damn if they’re ‘all not like that.’  They can just get the hell out of my country.

Mary Carmen Garcia, 27, and Daniel Guardiola Dominguez, 28, had 96 cards that were used to buy tens of thousands of dollars’ worth of merchandise. The information was linked to South Texas residents.  Read more: here

Two Mexican citizens who were arrested at the border used account information stolen during the Target security breach to buy tens of thousands of dollars’ worth of merchandise, according to a South Texas police chief.

FINALLY.   Yes, there have been some voices calling for O’s impeachment but a former leftist JEW that has written for many of the leading newspapers is doing what is right. Baruch HaShem.

Former lefty Jew calls for Obama’s impeachment.  Well, this made my day.  Nope, it does not matter what his ‘agenda’ is.  He is smart enough to know that this sonofab’tch needs to go.  Usually, liberal Jews make me want to puke and depress the hell out of me.  I am sure, though, that many stupid “Jews” will be castrating this man by this evening…

Add Michael Savage, one of my favorite commentators..  (But, Savage always knows what is righteous)

We never hear from black patriots because the Main stream refuses to show the good in their community. Too busy victimizing them. How, though, do we impeach an illegal?  Is it possible that Obama is trying to set himself up as a martyr?

Here is the story.
`

Rep. Congressman: “We Probably Have The Votes To Impeach Obama”

Yeah? AND?  You need to throw his ass out.  How do you impeach a man who is not even legal? These are the facts: The DEMS need to take out their racist trash.  OR, send this bastard on a vacation to Kenya. Permanently.

I pray every day that God will deliver me from this insanity and remove this monster.  Alas, my prayers may be heard, but the beast is still there. Sigh.

“I’ll give you a real frank answer about that: If we were to impeach the president tomorrow, you could probably get the votes in the House of Representatives to do it.”

Republican Congressman: We Probably Have The Votes To Impeach Obama

Texas Republican Rep. Blake Farenthold said that Republicans could secure the votes to impeach Obama in the House. Farenthold was speaking at an open house held at a Civic Center in Luling, Texas, Saturday according to a YouTube video description and the Congressman’s online schedule.