[This could be a hoax website, but one never knows on the net.  We have filed a complaint with the Internet crime center]  It has been brought to my attention that this person who wrote this website might be Jewish.   Since he wants the death of whites, may we advise that he kills himself first? American Jews are white.   Since Hitler murdered more white people than any other dictator in history including Stalin, we suggest he start his own Neo-Nazi, Totalitarian party.    On the other hand, he could be a Neo-Nazi himself, posing as a Jew.  Regardless, turn it in with the information at the bottom of this post.

White people where never legitimately alive.  Their very lives are abominations and acts of theft and murder.  To kill them is to right a wrong.

Most people actually agree with me on some level.  No one is going to do a motherfucking thing to me.  But they’re not going to find me either.  It is impossible to be racist against white people.  The world now accepts this.  Singling out and murdering white people en mass is not racism.  It has nothing to do with race.  Its perfectly fine to kill white people.  This is widely accepted by the civilized world now and its certainly accepted and encouraged in the the 3rd world.

He seems to take delight in the deaths of white, American people—posts & gloats about it:

As you have read this posting, hoax or not,  I ask you to take a good look at the murdered white people above & then ask yourself if there is not a genocide of white people in America at the hands of Obama’s sons.

Rep. Henry Waxman, California Democrat, will not seek re-election this year, becoming another member of a growing list of long-tenured congressmen who have recently announced … read more >

My buddy, Doug on the same page as me:

It’s true.  Liberal Jews will just walk straight into the FEMA camps without a peep.  Even Haaretz was rebuking the Jews that fought the Nazis at the Warsaw Ghetto (Haaretz Shames Itself on the Warsaw Ghetto Uprising)  Koo koo, koo koo

iOwnTheWorld has the story: here

Our Lovely #HarveyWeinstein As Miss America

This scum produced the movie “Inglorious Basterds”, a very lousy movie about Nazis.  Obviously, Weinstein is a Jewish man.  But, the sick part about this cat is that he is for the same gun control laws that killed off the Jews in Nazi Germany.

This piece of crap flick will attack the NRA.  You know, the same group that supports gun safety.    It is evident to me, that ANY Jew that supports gun-control is just a sick, demented lunatic, hell-bent on seeing people in our nation suffer at the hands of a tyrannical government.  I believe it would be Harvey’s personal heaven watching Americans get gassed just like the Jews were in Nazi Germany. 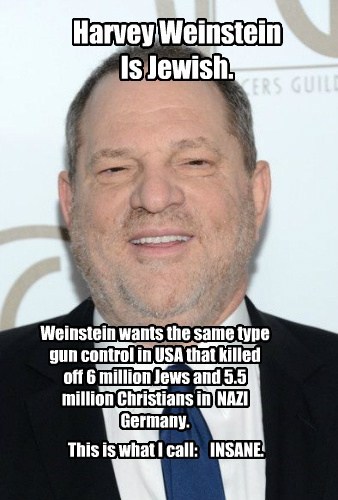 This is what Weinstein supports:

DONT TELL ME THIS IS NOT HAPPENING NOW BECAUSE IT IS.

How is all of this gun control crap going to work for you “Liberal” idiots when the far right wing takes over?

The Palis are so oppressed that they’re getting paid to do nothing while they are oppressed.  Friends..We’re just in the wrong business.  Why work when you can get paid to sit on your ass?

Where is Max?  Hello?  Crickets and Retweets only.  Never a refute.

Maybe they are eating some candy at a local market in Gaza where they’re starving to death, Max?

Or playing on the beach in Gaza?

European Union auditors are recommending that the EU stop paying the salaries of Palestinian civil servants in Gaza who don’t work.(Wapo).

The findings were made public by the European Court of Auditors, which scrutinized how 1 billion euros ($1.3 billion) in EU financial support to the Palestinian Authority has been used.

Here is my lesson for Noel-the Harvard, “Professor” who is a Genocidal, Commu-NAZI:   Just go kill yourself.  We don’t need any more Commie stench in America.  And, sane Jews have a bad enough rap without your existence. You’re a putz.  When you were born, they slapped your mother, which is why you are an eternal malcontent today.

He can take this idiot with him:  Another murderous, genocidal, Commu-NAZI.  (He thinks all whites are ‘supremacists’)… Tell it to the 2 elderly men who had the shit beat out of them the other night by sons of Obama. (No doubt, a couple fellow Komrades…)

“White supremacy”, My ASS.  G’bye, Noel..Take your little ass-buddy.. The world will be better when you kill yourself.  Asshole.

“Liberal Jews” In America need to grow a backbone, they bring constant defamation to right-minded Jewish people with their compulsive whining.

Anti semitic/ism” in words, etc.. occurs when some pig says something intentionally, with hatred to the Jewish people.   Cyrus is a dumbbell, not even knowing what  the hell she is saying.

‘Liberal Jews’ (Commies) should have realized ages ago, that a godless society would create animosity toward themselves.  The Liberal “Jews” here in America could have lived in their shitty, little, Commie communities all they wanted and stayed to themselves…  They should not have helped push it onto our lives by FORCE.  That’s why “Liberal” Jews are not Jewish or liberal at all–they are COMMUNISTS.

The hag, Cryus said nothing really ‘anti semitic’.  These dumb, Liberal, gasbag “Jews” are always crying over nothing.  They don’t know what real Jew-hatred is–at all.  I deal with it, daily.  I endure being told to “Go to the ovens..I’m a Zio-whore, kike bitch, Hitler was right…” Mostly by leftists.  You name the nasty things that can be said to the Jews and I deal with it..   What the hell did this idiot say?  Nothing of any real relevance.  It’s preposterous.  She probably works with a bunch of Jewish exec’s, producers who help this tripe put out really bad music.. What the hell ever happened to my people?? They used to produce and write beautiful music.. You “Liberal Jews” really are morons, now.

The scum also said some really nasty things about Christianity-: Miley Cyrus Incites Rage After Tweeting About ‘Forget Jesus‘ Photo.  Christians probably just said: “She’s going to hell” and left it at that.

GET A GRIP YOU STUPID COMMIES!  All of this crying wolf is going to backfire on your lousy asses.

DEAL WITH THIS PIG, Liberal “Jews”, You helped to create her with your love for every evil under the sun……..

Liberal ‘Jews’ Are DUMB:  Jarrett Is Iranian.  Stop Bitchin About Iran-You Brought This On Yourselves!

NOW, the Liberal Jews and AIPAC are bitchin today about peace talks and Iran.  Netanyahu, the Socialist is crying about Iran being a ‘honey pot.’  Jarrett is an IRANIAN.  The Liberal ‘Jews’ know this and trusted in Obama, anyway. Proving that they are dumber than a bag of hammers.. who claim they are these ‘staunch supporters’ of Israel..  So, what war with Iran? Jarrett?  Ha Ha Ha… Sure..   Personally, I may be ‘naive’ about Iran, I don’t know, but I have not seen them as an aggressor in their part of the world.  Maybe I am wrong, who knows?   I don’t see why everyone is scared of them. I dont like them because of the 444 days of American hostages.   My husband says they have nuke capability.   Really?  But, it seems like that noise has been going on forever.  They want to wipe out the “Zionist” regime – Almost All Muslims would like to do that, ditto many nutty ‘Jews’ and NAZIs.   I dont know what to think anymore about Iran.  I neither like them or hate them. I think nothing OF them.

My thoughts are this:  If Israel is a God-fearing Jewish state, then wouldn’t HaShem protect them?  My answer is yes and amen.  So, why does everyone ALWAYS worry about Israel?  Because they lack faith in God.  I don’t.  HaShem promises time and time again, that when Israel obeys holy Jewish laws and fears God, HE will be with them–they need nobody IF they do just that.

Just keep doing what you do best, dumbbell Liberal ‘Jews’: Keep voting in the Democrats who hate you instead of being Independent like me.   Keep supporting your enemies while you scream ‘anti semitism.’  Who cares anymore, you create anti-semitism every time you speak….