Communists from the White Privilege conference of 2014 listed 29 reasons why working with white people is a pitfall.  I have taken the liberty of explaining why working with blacks can be bad for you.  Liberal, black Democrats of course:

Here is my rebuttal: 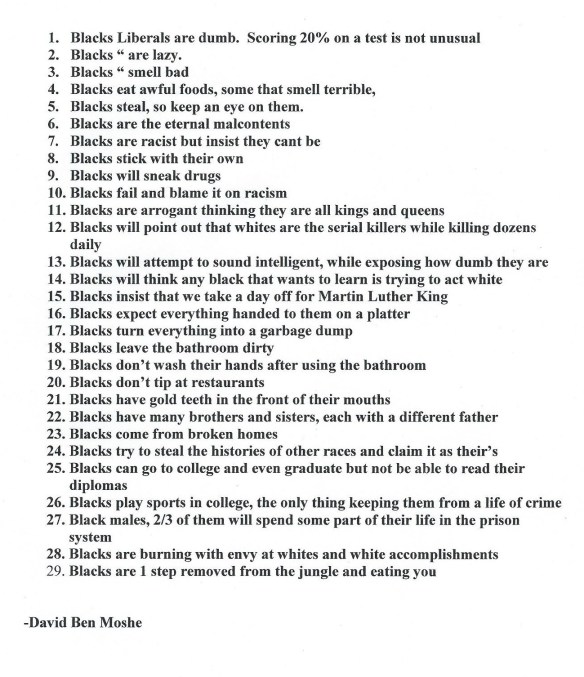 Keep yourselves away from these people.

That is what white privilege is:  Bow to the Obama’s—-or else.

I won’t ever vote for ANY minority…ever.  I don’t care what type of person they are.  I have had it.  If we oppose the Communism and war mongering lunacy, we are racists.  Who gives a sh’t if someone is a racist, anyway?  It’s their politics that are repulsive not their worshiped skin color.  If we oppose their revolutions in Ukraine, Syria, etc.. We are “Putin sympathizers,” “Anti Democracy.”  This is how the left shoves through their failed, disastrous insanity:  Just call everyone a racist.

Can we please put some adults back in charge?

ALL of that is the new racism.  So, when an ‘evil’ white Republican becomes President in 2014, you Democrats better not complain when he does the same things that Obama does because that’s what will happen.

Congressman Bennie Thompson, a Mississippi Democrat, has his finger on the pulse of America. And the heartbeat he detects is unremittingly racist.

A Mississippi Democratic Congressman says Clarence Thomas is an “Uncle Tom,” Mitch McConnell is a “racist,” and that Republicans are only anti-big government and anti-Obamacare because President Obama is black. Rep. Bennie Thompson was appearing on a New Nation of Islam radio program over weekend where he made the comments. “I’ve been in Washington. I saw three presidents now. I never saw George Bush treated like this. I never saw Bill Clinton treated like this with such disrespect,” Thompson said. “That Mitch McConnell would have the audacity to tell the president of the United States — not the chief executive, but the commander-in-chief — that ‘I don’t care what you come up with we’re going to be against it.’ Now if that’s not a racist statement I don’t know what is.”

#NBA Sterling Story Is Not About Racism, It’s About A B*TCH Of An “American” Woman

The main stream media again fails in reporting the truth.  All that the MSM reports is sensationalism.  AND: They are always looking for the evil, white, boogey-man racist.  They really didn’t find one in Sterling and they didn’t find one in Bundy.  Bundy and Sterling both have large amounts of American blacks in their lives. True white racists have NOTHING to do with anyone BUT whites.

What Pill O’Reilly, Fox, CNN, MSNBC, CNN, ABC, YAHOO etc failed to report in depth is that Sterling was having a private conversation with his vindictive girlfriend.  He said this on the telephone to his on again, off again girlfriend in private.  What his vindictive girlfriend does not understand is that it’s against FCC laws to release a private conversation without advising the other person in the party line.   And, in Sterling’s case, (since he is a big wig), she would have had to obtain a signed release.  If the Sterlings were smart, they could destroy this female for life.

I listened to the whole conversation.  Sterling was more tired of his friends seeing pictures of his gal on instagram and his friends making fun of him than anything else.   He was tired of the humiliation.   He even said that he didn’t care if she ‘f*cked all of them.’   A true white racist would never put up with a race traitor.  That’s the facts.

Whether Sterling is a racist or not, this story is about a sell-out bitch who has destroyed the life of an old man for political gain.  She is the bad one, not Sterling.  That’s the facts.   The old man is better off with an old babe.

Obama’s Freudian Slip In Malaysia & Many Blacks ARE Slaves To The DNC. “Jimmy Cracked Corn’

Obama was in Malaysia where the Malaysians protested him because he is hated there as much as anywhere else.. But, he told a Freudian truth: Obama Condemns ENTIRE US for NBA Owner’s Racist Comments in Malaysia – Says US Still Wrestles With Slavery (Video)

Here are the facts about Obama’s Democrat blacks:

What is the difference in then verses now?

Blacks democrat slaves who live in the ‘projects’ and exist on welfare do not have to work.

We can all see where Jim Crow is still alive:   The Democrat Party.

This is why I do not react at all to racist accusations.  Because I have ALWAYS known who the real haters of minorities, mentally ill, elderly and basic humanity are:  The Democrats who enslave minority and sick Americans in a psychological noose.  Minorities & others should be able to determine their own future without big government, even if they fail.  At least they would be able to say that they were never ‘3/5ths of a person.’

My husband exposes black on white crime here because we expect black citizens to act like every other citizen, yet, they call my husband racist…

I don’t know how many people are laughing AT Jesse Jackson.. But, I sure am.  Do you folks realize that the race card is over?  Obama’s sons have used it and now its just a bad card in an old deck.

Jesse Jackson has no doubt that on the 50th anniversary of the March on Washington, Republican opposition to President Obama’s policies is motivated by racial animus reminiscent of the Civil War-era South. “The tea party is the resurrection of the Confederacy, it’s the Fort Sumter tea party,” Jackson told Politico’s Glenn Thrush.

Bye Jesse, your time has come and gone.  It is finished.  Halleluyah. 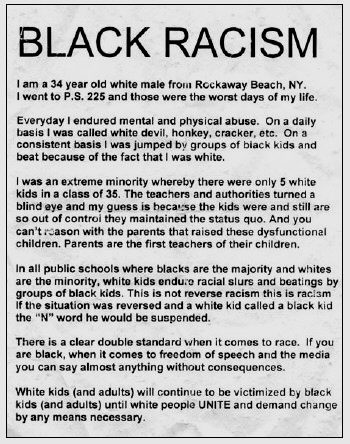 Obama is a divisive monster, set out to destroy us all.  I am not ‘for’ these Black Panthers by ANY stretch of the imagination, but this video is 100% truth.

EVERYTHING THAT IS NOT RACIST… IS RACIST.

Did you all know that if you dress up like Obama as a Rodeo clown, it’s racism?  That’s right. Dressing El Presidente’ Jackass as Bozo is wayycisssst. (Whatever) Meanwhile, the poor clown has resigned.  The Liberal creeps are foaming at the mouth, calling everyone a racist and I even hear Paula Deen digging up old stories to get extra attention.

They have now advised all Rodeo clowns to get Communist 'sensitivity training'...

This is the GREAT America, folks.  Aint ya proud to be an American? I know I am.  Look how special we are. So classy. We have a CIC that helps murder Christians in Syria.  Is thinking of boycotting the Russian olympics because Vlad does not want ‘gay’ in his country. Obama  leaves men out to dry in the middle of Egypt while he sucks on his falafel and targets political opponents with intimidation through the IRS.

YA CANT MAKE THIS SH’T UP, FOLKS…

Obama IS a clown-ass. People were making graphics and signs of Obama being an evil clown LONG before the Rodeo man dressed as Obama. See this link for yourself:  here

I guess the NAACP runs the WH and they are gonna come and investigate all of us.  I’m shaking in my boots.. 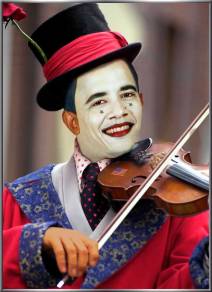 The Prez is a lyin African.

Wrong card, jackass.  We’re already miles ahead of you.  We all already know that you will use the SEXIST card to push yourself in as AmeriKa’s first Evita Peron. I would not vote for this snake even if someone offered me 100 million dollars.  What difference does it make? We will be stuck with either a far left wing Commu-NAZI Dem. Or a Marxist-lite GOP jerk like Christie.  We are screwed.  NO wonder so many people are renouncing their citizenship.

So many AmeriKan women will vote this skank in just BECAUSE she is a female.  Not because she is a good leader. She’s a murdering psychopath. Not much more different than Obama. But , women just want to see a female as pres and care nothing for AmeriKa.

Here is her big mouth
`