Sons Of Obama Are Beating & Murdering Whites, No Mentions Because They’re Not Jewish?

Last weekend, Frazier Glenn Miller, a crazed Democrat Nazi shot up a Jewish community center, murdering Christians and the MSM went wild. This week, blacks are beating whites–not a peep.  It’s only important if it’s Jews or blacks that are shot and killed?  Who determines which life is important?  Obama? Holder?  You?

Brainiac, Jamie Foxx: “Most Of The Gun Violence In America Comes from African-Americans

We blog this daily.  When we post and talk about it, we’re racists.  Truth from a bad actor & a stupid Obama-voter with an IQ just north of a bedroom slipper:

The left wing says ‘knock out game’ is fabricated.  It would not be fabricated if the victims were black.  While these race/hate/knock out game crimes are happening, the liberals are confiscating guns & white people are worried about offending blacks as they’re practically beaten to death.  Not to mention that we have a race-card hustling HNIC.

This is all the white man’s fault:

Click-Another Case Of When Asking For A Fight Goes Wrong: Female Gets A Beatdown For Trash Talking Outside Of Grocery Store

The main stream is still looking for out of control white racists.

Obama’s sons are emboldened by the lack of justice coming from Eric Holders DOJ.  NYers should be carrying sub-machine guns and prepared to shoot since the fed won’t hold ‘their people‘ accountable.  Under normal conditions, when there is no justice, the people will take the law into their own hands.  But not in America, a nation that has become an apathetic nation of sheep.

More than a dozen sons of Obama riding motor bikes and ATVs blocked a busy stretch of Broadway in Washington Heights on  Sunday afternoon – just blocks from where a motorist was beaten in front of his wife and child last fall.

2 Blacks Murder A Jew In NYC Who Was A Real Estate Developer. They Dumped His Body In A Dumpster

Some are saying that Stark owed millions of dollars and was a slum-lord.  People that knew him said he had a list of enemies a mile long.  So, we’re not sure what type of attack this was.  Was it Mafia? Did he borrow money outside the Jewish council?  Or, was it just a couple of black males just doing what they usually do?

Was it a race crime?  And, if it was, why? In NY, the system works on behalf of the blacks and nobody else.  They could have sued him and seized his possessions–easily, in New York City.

The 2 blacks have not yet been identified

Geller believes the front page of the NYPost is anti semitic: @NYPost Shocking Front Page Cheers the Kidnapping and Brutal Murder of a Religious Jew

(We don’t believe the NYPost is anti semitic. Satmar Jewish men (sect of Judaism) are rarely seen without their religious clothing, so the picture submitted on the front page of the NYPost was how he dressed, nothing more)

Of course our thoughts are with Stark’s family.

I believe it is 4 whites who have been murdered.  If these crimes were in reverse it would be front page news.  We had a commenter here who believes that these deaths are ‘hypocritical victims.’   The usual spew from an ‘anti’ racist who cares nothing about humanity unless they’re black.
Are people being murdered solely based on the color of their skin?  We believe so.  Many blacks believe that white is just another word for weak.  We have a DOJ who seems to not care unless its a black person.  Case in point is the trial of G. Zimmerman, who we heard about non-stop for a year.

Savages who should be lynched, not given a trial:

The only news that makes the ‘main stream media news’ about these racial crimes — is if a white person is charged with a hate crime.  It’s the double standard that is maddening.  Daven/prayers for these victims in America’s 40 year race war.

It doesn’t matter what country these black males are in, they just can’t seem to act civilized.  These ‘people’ (people in the loosest sense) are a bunch of savages barely removed from the jungle.

In the jungle, the mighty jungle, the schvartze sleeps tonight.    Or in our case, they’re up all day beating whitey.

Savages not yet identified but they’re black

Charlottesville Newspaper Shuts Down Comments on Knockout Game Report for ‘Hateful Nature’  (Blacks ‘knock out’ white couple & other whites.)  They shut down the comment section of the aforementioned post because it was ‘hateful’ against black people.  What do they call these racial beatings? Love???

If this white man had a gun, we would have one less black problem.

PS:  Happy New Year which is starting out as expected.

His victims were 3 and 4 years old.  Where is Jesse Hi-Jackson? Al Sharpton?  Read it here because the MSM surely won’t report this.

Update: One, they say is Mulatto (Black with a white father or mother.) This is a racial/hate crime, period.

These animals murdered Chris Lane ‘for the fun of it.’  Isn’t that what the KKK/White Supremacists used to do to blacks in the south?  Why were they racists but blacks who murder, rape and rob white people, not racist?  And, why are other conservative websites leaving out the fact that this is a racial/hate crime?  These “Conservatives” are doing what the left-wing media does.  So, do us all a favor; Don’t bother because you are too cowardly to be in this fight. Too chicken because you don’t want to be called “racists”   Just get in the damned fight or get the F*CK OUT.  YOU ARE NOT HELPING ANYTHING.

The OKC PD LIED about the race of these murderers: Duncan, Oklahoma police chief lied about race of suspect in hate crime murder

STUDENT RANDOMLY SHOT DEAD BY ‘GANG OF TEENS’ JUST ‘FOR THE FUN OF IT’, POLICE SAY

The Mug shots.  The 2 black teens were charged with the murder. This one kid in the middle was charged with driving the car and accessory.

They say this middle kid is ‘mulatto:’

Market Watch was able to get the RACE of these PIGS out, and their picture -Hat Tip: Stewart

Doug has guts, reports their RACE: Just ‘Three Bored Teens’? No, It’s ‘Three Bored BLACK Teens’ Who Gunned Down Australian Ballplayer ‘For the Fun of It…’

(These are the 2 that are charged with the murder.) 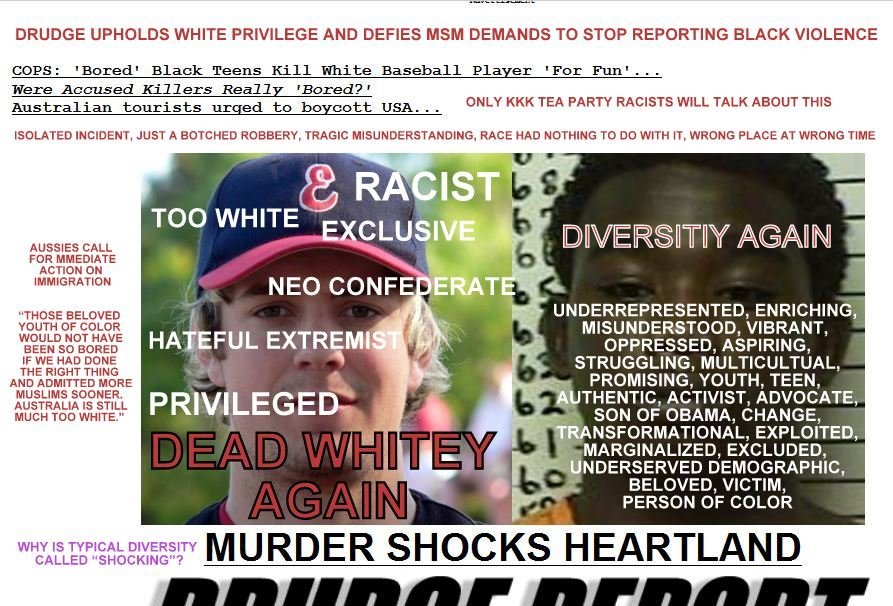