First of all…they are not even ‘Liberal’.  What a lie!! Look up Liberal in the dictionary–they are opposite of the definition. They call themselves “Liberal” so they can HIDE their real motives..

Almost all acts of terror are committed in America BY Liberals.  They also enable Jihad Muslims.  Left-wing terrorists are everywhere.  When they call God fearing Christians and Conservatives ‘terrorists’, they are only projecting their own insanity.  These Liberals are in your neighborhoods, schools, restaurants, shopping markets, malls–plotting to kill your country.  Since the 1880’s, the left wing cabal of red terror has been scaring Americans.  They have no control.  They will even commit treason for the greater good: HISTORY OF LEFT WING TERROR ATTACKS.

They want our guns to terrorize and murder us.  So, we need to remove fire-arms from ALL Liberals.  They are not worthy to possess guns.  Liberals hate freedom, they hate liberty.  With a passion.  They are only for huge government fascism like the Communists and the NAZIs. Liberals MUST be disarmed. They abuse their power to the max when in control.  Even their idiot “President” Obama starts little wars all over the east to terrorize little countries with HIS guns.  We never see Obama threatening to invade China or Russia because he is a BULLY.  That is what Liberals are: BULLIES.  A bully needs his/her power stripped.

WE MUST PASS LEGISLATION TO STRIP ALL LIBERALS OF THEIR GUNS, THEY ARE A THREAT TO CIVILIZED SOCIETY.

The FBI arrested 5 #Occupy Cleveland protesters for plotting to blow up the Cuyahoga Valley National Park Bridge in May 2012. The terrorists repeatedly tried to blow up the bridge: LEFTIST TERRORISTS.

Tim Wise believes you should execute whites who are Tea-party members (TERRORIST!)

We ALL know about Bill Ayers the LEFTIST/TERRORIST.

Black Panthers; TERRORISTS who want to murder whites and their babies.  They have Eric Holder (TERRORIST) who enables and protects them. 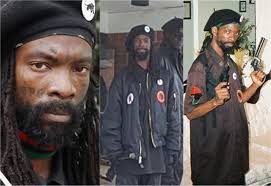 The list goes on & on of Liberal-terrorists. They must be stopped.  If a right minded person EVER gets in office again, we must strip liberals of their guns, expeditiously.

If this was in reverse, it would be on the national news for the next 2 weeks.  We would hear how conservative American’s guns need to be taken.  The Obama regime would be on the TV 24/7, demanding our rights be infringed upon & the Black Panthers would have posters saying; “Kill Whitey”.

Even though the white population is only 28% in California, it’s still a one-way street.  It’s not racism when a black savage does this to a white person.  It’s only racism when the KKK comes out of hiding every 10 years to ‘kill themselves a nigger,’ Or when Republicans hold a Tea-party and dissent against Obama’s policies.

Gif by The Mad Jewess

Like Loading...
Black Supremacists Vs. White Supremacists: Whites Get Arrested In FL, Blacks Go Scot-Free.
That’s America, now.
–
The white supremacists were planning to kill minorities, illegals, blacks and Jews.  The blacks supremacists: If you want freedom, you will have to ‘kill white crackers and their babies.’    If you defend yourself against the Trayvons of this world, you will be hunted down, and a 10 K bounty will be placed on your head, courtesy of the Black Panthers.  If you are white, angry, and thinking about things, you will be arrested.  Personally, supremacist groups don’t bother me.  If they want to be that way, that’s fine, (I am locked and loaded, so I dont give a damn, I shoot back.)
Acting out, in public, advising to murder ALL white people is grounds for arrest and possible jail time. If you are acting out in public, saying “kill ALL minorities, illegals, blacks and Jews”, you should get arrested, tit for tat.  Evidently, these supremacists were preparing for defense. So, if you are white, and preparing for defense, be careful, you WILL be arrested and no doubt, they will probably label you as a ‘white supremacist.’
–

DOES THIS MAKE US ALL WHITE SUPREMACISTS NOW, THE SAME WAY WE ARE ALL CATHOLICS, NOW?

Like Loading...
Trayvon Martin Case: 6 Shots Fired Into Police Car Near George Zimmerman Home
–
This is what happens when you have a minority in office that says “Trayvon could be his son”, and the Black Panthers issuing death threats for a race war, with NO ramifications.
–
I was reading last night that many black people have been brainwashed to kill off white cops.  This was in the book called “The Race Card“, which I think you all should purchase to see just how bad this problem is with minorities/blacks, etc.
–

I really dont get it.  Yes, Aulaqi was a talking-head terrorist, calling for bombing America, yes, he should have been killed.  Yet, Van Jones calls for “offense” against Conservative Americans (Violence against Americans.)  And goes scot-free.  All on the same day as Aulaqis death!!!! NOTHING MAKES SENSE ANYMORE.

Leftists have been plotting for YEARS to crush America, have given aid and comfort to enemies, foreign and domestic. Yet, they are allowed to walk around, stirring shit, calling for violence just as Aulaqi did–especially Van Jones and Michael Moore, but they go SCOT FREE just because  they are ‘liberals’.     We LET these ENEMIES go scot free, inc the Black Panthers who want to ‘kill crackers and their babies’, yet Aulaqi was killed and these excrement live.  There is *NO* real justice anymore, if there was, leftists would be hung for treason, along with the Black Panthers & La Raza, both leftist terrorist groups..

What in the hell is the difference:

Mumia Abu Jamal was a Black Panther who shot a 25 year old Police officer. He continued to pump bullets into the fallen officer, while the officer was dying on the ground, he was laughing about it the whole time. NPR supported this murderer and gave him a radio program, to voice his hatred and murder. My question is, why did it take some taped sessions of the NPR undercover to cut off their funding?  This incident with this officer should have BURIED these bastards. Jamal is on death row, since the early 1980’s, WHY is he still alive? And what’s more, WHY do we have to wait until now to cut these enemies off at the root?

In 1994, NPR arranged to air commentaries by convicted cop killer Mumia Abu-Jamal on All Things Considered, but canceled them after the Fraternal Order of Police and members of the U. S. Congress objected to the airing.

The Head of the NAACP says that the Black Panthers are a ‘made up creation’ of Fox News, yet, Ahmadinejad meets with them??

WHY has NOBODY covered the story of the Head of the NAACP saying that the Black Panthers are made up? WHY!!!! G’DAMMIT!!! WHY!

Copyright Disclaimer Under Section 107 of the Copyright Act 1976, allowance is made for “fair use” for purposes such as criticism, comment, news reporting, teaching, scholarship, and research. Fair use is a use permitted by copyright statute that might otherwise be infringing. Non-profit, educational or personal use tips the balance in favor of fair use