ANOTHER Federal Land Grab In The Name Of “Environment” In Temecula, California

The FEDS & BLM are fascists. They don’t give a damn about tortoises, rats, or condors.  It’s about power.  How much do you want to bet they’ll find some tape from 50 years ago saying Johnson was a racist in 10th grade?  And, Americans will chomp at the bit to destroy Johnson’s life as well.    People get angered at me lately for standing in the gap over things that are not considered conservative… Since when is big government conservative???

Johnson purchased 11,000 acres of land in Riverside County over 17 years ago, including Vail Lake, encompassing over 1,000 square surface acres of water. Now Johnson claims various levels of government are trying to seize the property, using intimidation under the guise of environmental concerns.

They want our money, land and soul.. How long are we going to put up with this until we storm the Bastille?

Brian Beulter from “the Salon” says patriots/conservatives are obsessed with black on white crime.  No, black males are obsessed with knocking out innocent people.  Where is Eric Holder?  He’s out looking for white Nazis.  Many left-wing rags say this is a pretend phenomena.

We hope this lady is faring well after being hit so hard:

Patch: Los Gatos May Be Related to “Knockout Game“

In NYC, the NYPD calls the ‘knock out game’, harassment: New York cops think this woman being hit in the face is simply HARASSMENT?  Hat tip: @ophidianpilot

The rest of you decent Californians, please move out of there.  Leave the Liberals and their NAZI buddies to die.

It breaks my heart to look at the sad state of Cali.  Not because of people left behind in the Communist dump, but because my grandmother so loved the state.  When we moved from The Hamptons on Long island to Carmel, California in 1980, it was so gorgeous.  Clean.  Just a wonderful place to live and visit.

THEN, in the 1990’s, Bill Clinton opened the borders WIDE and Pete Wilson, the governor of Cali who was also a Republican just CAVED.  I remember the street I lived on in the early 90’s–it was filled with Arkies and Okies (Salinas, CA)  In 5 years, it was half illegal, half white.  I lived there for many years.  When I finally said; Shit!! I’m getting the hell out of here!“….It was almost ALL Mexican and illegal and they still call the whites, “Racists” Ludicrous..  27% are white in Salinas and they live behind gates.   There were helicopters every 15 minutes above my home in this violent city.  Sirens all day long.  Just a mess.

2. Take from the haves; Taxed out the wazoo, Californian citizens now foot the bill for every 3rd world dumbbell.  Californians pay to clothe, feed and house these creeps.

3. Disarm the populace.. Brown has been disarming Californians since he was voted in, again.

Jerry Brown is a stinking Communist!!

“Corruptus in Extremis”  –  Fruitcake California Governor Jerry Brown’s signing a bill giving illegal alien law breakers drivers licenses is a case of double corruption.  Of course corruption is just a day in the life of the People’ Republic.

(If you are still in the hell-hole, California, please add this blog to your favorites for all of the rotten, Commie news there.)

”On the morning of the 14th (Sunday) my step son, a Lance Corporal in the United States Marine Corps , was out with two other friends off base in 29 Palms CA. One was a Marine the other a Civilian. Steven and the other Marine are both white, and they’re mutual friend is black. The three men observed a large group (15-20) African American males walking down the street making a lot of noise, shouting, causing a scene. Many were carrying weapons, ie…batons, and at least one tire iron.

First off..Let me say that the Jewish girl in this video that is being attacked by the left-wing NAZI is just taking this crap.  I would have rather faced a night in the slammer than allow ANYONE to treat me in such a fashion.  NOBODY pushes The Mad Jew bitch around–EVER.  She should have pushed back.  That’s my opinion.  I wish she pushed back and punched this bitches face in & knocked her teeth out.  I would have.

Right-wing, patriotic and Orthodox-Jews  who have lived in this country, blessed this nation and worshiped HaShem in America:  You need to learn self-defense.  I mean serious self-defense if you are to remain here.  Guns, nunchucks, knives, long-bows, compound bows-whatever it takes.

Left-wing NAZI ism is turning AmeriKa into the fourth reich. 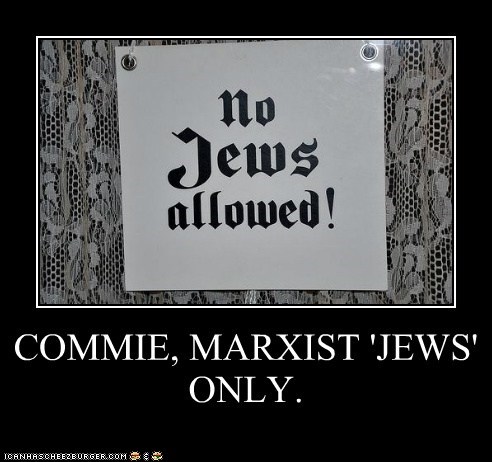 How does everyone like O’MeriKA!  Isn’t it grand, living in ‘free’ America? Where NAZI Cops patrol your every move obeying the orders of their commander in chief.. Enjoy.  We asked for it.  40 plus years of apathy & spiritual gluttony…

I had a dream about these drones in 2009, See: TERRIBLE Prophetic Dream I Had In March 2009 About America Under B. Hussein Obama

Click to see the story here: ‘Eye in the sky’ drones flying in San Diego County

If this was in reverse, it would be on the national news for the next 2 weeks.  We would hear how conservative American’s guns need to be taken.  The Obama regime would be on the TV 24/7, demanding our rights be infringed upon & the Black Panthers would have posters saying; “Kill Whitey”.

Even though the white population is only 28% in California, it’s still a one-way street.  It’s not racism when a black savage does this to a white person.  It’s only racism when the KKK comes out of hiding every 10 years to ‘kill themselves a nigger,’ Or when Republicans hold a Tea-party and dissent against Obama’s policies.

Gif by The Mad Jewess

California is turning into the worlds biggest garbage dump.  NO doubt, the Lefty-S.A. NAZI’s in Commie-fornia want sweet, little, pansy-ass fairies in charge of Los Angeles.. Good.  Let it burn.  I’m sick and tired of these left-wing cities, they really are vomitous.   Just think… If God himself–rid America of D.C., Manhattan, Los Angeles and Chicago (all lib pig-pens, btw) the WHOLE WORLD would be a better place.  We would have world peace (to some degree)  Now, that would truly be change you can believe in..

This is what the leftist, Social-justice for moonbats want to man the streets of Los Angeles (eye-roll):

That’s  really gonna work  against this:

This should be Freak-a-Fornia’s new state Anthem:

Get mad at QV all you want, but he is RIGHT about Sodom-O’MeriKa.

This is all Obama’s fault with his fag lifestyle.  Turning the military into pansy asses that have to take sensitive training for the queers..