Read it all here:

See: Federal law says you can opt out of Obamacare, nor can you be penalized if you do

Obama is a fascist.  It’s quite unbelievable that Obama does worse than Bush and even the same as Bush but the ‘liberals’ do not say much.  It’s because they are totalitarians.

See the post at the Mad Jewess hating website, “The Daily Caller” (They hate me, banned me as many sites do to me because they despise the truth)

This is Obama’s white-hating America. How will this work for white Commie/left wingers? Hopefully, La Raza will kill off every last white liberal by taking all of the jobs that are supposed to be American jobs in the Fed govt….

CHANGE WE CAN F*CKING BELIEVE IN

La Raza, whose name translates to “The Race,” will sponsor a workshop to help members fill jobs in the Senior Executive Services (SES). These are special management positions with salaries often exceeding $200,000 in cash and benefits annually.

By the way..This is La Raza:

If I was in charge….La Raza and its allies would be spitting blood. Dead, as in NOT living.

I wonder how much O’Brien gets paid by the Obama administration to sell the country out.  Throw Stevens down the river just to protect Obama? My guess is that the WH called O’Brien and asked him to start the spin.  “Make it into a GOP lead thing, because nobody watches what we do, anyway”  Anyone with a brain knows that NBC and all of the alphabet channels are run by the White House.

But while many Republicans appeared eager to keep Benghazi alive as a political issue, not all Republicans seemed as concerned about the issue, or the Obama administration’s forthcoming. 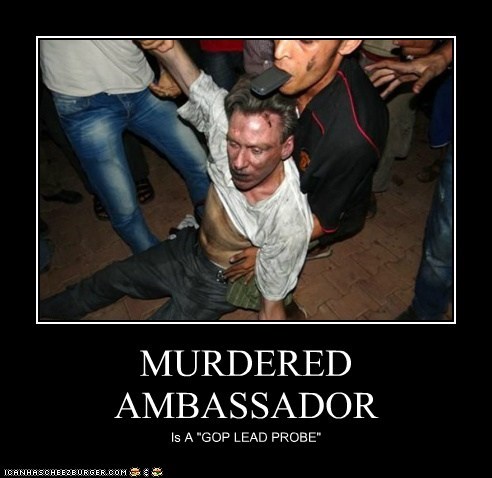 This is treason.  It is time to oust these people.  If not now, WHEN? What’s it going to take, men?  What?  Gulags?   Every single day, this administration works to destroy the Constitution.   They can’t even follow the basic tenets of our laws–on either side.

They want our guns.  This means they want to control and murder us.  What the hell other explanation can there be? When they take your guns, you are dead.  Need proof?? Just ask the Russians, Germans and Chinese.  Meanwhile.. Bill O’Reilly is worried that Obama looks like Satan from the movie, “The Bible” (miniseries) THERE IS NO OPPOSITION.

A bro of the HNIC:

His slogan was “You can Bank on Banks.”

It’s an Obama-nation, read for yourself.

Ever thought it is not now politically advantageous for either the Democrat or the Republican Party to tell the truth about Obama? Both parties are steadfastly protecting Obama to protect their investment in the corrupt political status quo. Many politicians are greedy psychopaths. They go to Washington for prestige, payola and privilege; and they retire rich.

–
Both Democrats and Republican recognize that exposing Obama will lead to a bloodbath of revelations about their complicity to undermine the Constitution and flout the rule of law, which would jeopardize their comfortable lifestyles. The truth would generate genuine outrage among the American people. For didn’t the American people give Congress a credit card with no limit? Rather than themselves being financially penalised for their largesse, members of Congress simply pass the debt along to ordinary Americans and future generations, while they enrich themselves through the power granted them to spend your money. Do a little research and you’ll discover that elected Representatives and Senators represent the government — not the American people.

One has to be terribly naïve or a total Dimwit in believing that America has two parties. Elections have been manipulated and the people have been deceived. The reality is that the politicians are wearing the same hat with a different colour. Politicians are parasites and are naturally attracted to creating class warfare. Their job is to manipulate the people against each other, causing social unrest as excuses for suppression of the people. The American people handed them a platter for such abuse. TSA, Patriot Act, NDAA, Fema camps to name a few.

And Americans obey like afflicted Down Syndrome imbeciles. 5 decades of leftist schooling has rendered the average American spineless.

From the Communist Goals for America:

# 15 Capture one, or both, of the political parties in the United States.

Dr. Jones Writes A Letter To Our Usurper/Prez, Obama

(Personally, I dont know WHY we are discussing Obama. He is a FRAUD and should not even be in the White House-he is NOT my president-not now, not EVER.) *Possibly a fictitious story, fictitious Dr… who knows?  One thing I DO know…is that this below scenario is the truth. I have seen crap like this many times at the ER.

During my shift in the Emergency Room last night, I had the pleasure of evaluating a patient whose smile revealed an expensive shiny gold tooth, whose body was adorned with a wide assortment of elaborate and costly tattoos, who wore a very expensive brand of tennis shoes and who chatted on a new cellular telephone equipped with a popular R&B ring tone. While glancing over her patient chart, I happened to notice that her payer status was listed as “Medicaid”! During my examination of her, the patient informed me that she smokes more than one costly pack of cigarettes every day and somehow still has money to buy pretzels and beer.

And, you and our Congress expect me to pay for this woman’s health care? I contend that our nation’s “health care crisis” is not the result of a shortage of quality hospitals, doctors or nurses. Rather, it is the result of a “crisis of culture”, a culture in which it is perfectly acceptable to spend money on luxuries and vices while refusing to take care of one’s self or, heaven forbid, purchase health insurance. It is a culture based on the irresponsible credo that “I can do whatever I want to because someone else will always take care of me.”

Once you fix this “culture crisis” that rewards irresponsibility and dependency, you’ll be amazed at how quickly our nation’s health care difficulties will disappear.

Illinois Rep., Mike Bost~My New Hero, A REAL American Who Is SICK Of IT ALL. I love this man. This is the way ALL men should be in America. Either that, or sit back and let the bastards take this nation, completely.

ALL AMERICAN MEN NEED TO BE RIGHTEOUSLY INDIGNANT LIKE MIKE BOST.

This is what ‘liberalism’  leftism does to Americans:  Makes them enraged. It is time to STOP the liberalism/leftist junk in America.  If we don’t, they will be passing a lot more than just very bad regulations…As you plainly saw yesterday-they will literally start eating us all up.  People are calling this a ‘tirade.’  The IDIOTS cannot tell the difference between a ‘tirade’ and righteous indignation because they are SO FAR removed from American and its original values.  Poor suckers. I cannot unite with these ‘liberals.’  Either they start accepting Americanism, or I pray that God will curse them ALL.

He has resorted to out and out right lying …. Dude your on record for giving Solyndra 500 million tax payer dollars just before they went bankrupt. The whole freaking country knows this already!

This asshole never takes blame for what HE does. EVER. What is the GOP going to do about it?