As America Is Coming Under Communism, Glenn Beck Is Worried If We “Hate” Some People

I have given Beck a much needed make-over to suit his personality better.  Beck says:   “If you hate gays, liberals, etc, you are not a fan of his.”  So, Beck is the new thought police.  You know…I dont have to like anyone,  and anyone does not have to like me and Beck can go f*ck off.

This is all I have to say to Fart-face, Glenn Beck:

More about Beck from patriotic people who are tired of his insanity: Glenn Beck’s Got Some Rethinking to Do…

I own the World: “Glenn Beck – ‘If you hate a person because they are a liberal I don’t want to have anything to do with you’,” and Robert Stacy McCain, “Glenn Beck’s #LGBT Agenda?“ 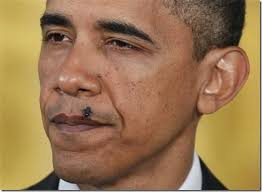 Why is everyone shocked that Roma Downey’s new mini-series has Obama as the satan?  He ACTS like the devil… so, no real surprise there.  How much more proof do people need that Obama is evil?! He already has manifested flies on his face, rats crawling around.  Jeezzz.  What more do folks need?!

Is he one of satan’s ‘Nephilim?’

The Nephilim (pron.: /ˈnɛfɨˌlɪm/) were the offspring of the satan and the “daughters of men” according to Genesis 6:4; and giants who inhabited Canaan according to Numbers 13:33.

(You be the judge of this above…)

Media Matters LIED To America; Egyptian Jihadists Calling For CAPLIPHATE To “Take Jerusalem”   -You all take a good look at these diseased Bolsheviks at Media Matters, who undermine God, America, Israel, are Commu-Nazis and should be hung for treason, expeditiously:   Caliphate Comes To Israel | Media Matters for America

This is an excerpt of what these LIARS said in the above link from late 2011 and have put many Americans & this whole world in great danger:

Earlier this year, Glenn Beck emphatically punctuated his steep descent from cable news superstar to conservative pariah with a website when he birthed the hopelessly paranoid notion of the coming socialist-Islamic “caliphate.” As uprisings in Egypt challenged Hosni Mubarak’s authoritarian government, Beck took to the airwaves to declare that we were witnessing the beginnings of carefully coordinated plan hatched by communists and Islamic radicals to bring about a new “caliphate” that would stretch across Asia and Europe.

After being denounced by conservatives, progressives, and everyone in between for his hysterical and apocalyptic fearmongering, Beck dug in and insisted not only that he was right, but that he could prove it. For months now has been rooting out the people and groups that, in his view, are complicit in the scheme to install the caliphate and destroy Israel. And now, it seems, the Israelis themselves are in on the conspiracy.

(FACT: Media Matters LIES & has put not only America in great danger, but the whole world.)

QV who lives in the east says;

Watch the video.  It is only two-minutes long .  See the mob’s mentality to destroy the Jews.  To me, it spells the doom and demise of America.

Media Matters, as usual suffers foot in mouth.  Beck Still Promoting Conspiracy Theory That Socialists And Islamists Are Working Together, Lashes Out At Kristol Again

Actually, I was the first one that said these people are working together.

Media Matters knows very well that the Bolsheviks/Progressives/Socialists/Muslims, Neo-Nazis/Liberals are all working together in their insanity against God and Israel.

Pastor Manning used the word “nigger” and for this, as black as he is, the Tea-Party rejcted him- he is BLACK, and the Tea-Party condemns him for criticizing his own people?  One word: LIBERALISM. Liberals are against FREE SPEECH. Can’t you see how sickening many of you have become?! I criticize evil left wing Jews constantly, as well as political Zionists (supporting Israeli-govt, and not the PEOPLE of Israel), are you going to reject ME for criticizing my own people?? Well, go screw yourselves!

The Tea-Party, to me- has turned out to be a bunch of wuss’s that oggle at Beck -worse than the Obama-bots. In truth, you should be ashamed of your idolatry, but you are not. Glenn Beck is a MAN. Mankind screws up.  Still, the Tea-Partiers, infiltrated by ‘touchy-feely’ “Liberals” destroyed a big movement that began spontaneously with the Town Hallers. THAT was the real deal.  I realize this post will piss off a lot of people, but, imo, you have turned to worship Beck.  You do. It is like everything the man says is “Kosher” and it isn’t. The other night, he told you listeners to NOT ‘hit the leftist radicals back if they get physical’.  So, now you are wanting to be martyrs?               So, if these leftist, America-hating scum-bags attack your family, you will sit there? MY GOD WAKE THE HELL UP!  Like asking Jews to march straight to Dachau all over again.

Another thing that you all know.. Beck calls people that have been following the birth certificate issue since 06/08, “Crazies”.  That is liberal-speak, attack-mongering on people that have not seen proof of where the dictator-wannabe, Obama was born or ANY of his records.  SHAME ON YOU.  You should be taking everything that Beck says as a ‘grain of salt’. How do you feel, now that you are only part of  Controlled Opposition Fakes ?

Pastor Manning is the REAL deal of getting right with God, Gentile AND Jew-NOT Beck.

My opinion; Well, I kind of agree with this synopsis. (NASCAR lovers, please read.)

It is not the time for ‘peace’, Mr. Beck. It is the time for righteous indignation and ‘fightin’ words’. The left has been pushing false peace crap for over 40 years, while they have torn this nation to shreds.  Beck has also said that if the left gets violent with you, “DO NOT HIT BACK”. That is Garbage and rubbish. There is a time for peace and a time for war. To sit there and take this crap, while they start getting violent with you is absolutely preposterous.

Christians: WWJD @ this stage in the game? He would overturn the money-changers. Thats the facts.

While the turnout at the Glen Beck rally was impressive, the outcome was anti-climactic. The moment when a Patrick Henry could have stepped up and demanded the ouster of the Bolshevik henchmen and their Black Racist, African-Arab-Muslim-tyrant came and went. What they got instead was a mealy mouthed Beck’s staged, transparently phony sermonizing. The event that began with so much promise fizzled. An opportunity lost like a last-second, game winning touch down pass, dropped in the end zone at the Super Bowl. What America got was typical RINO foreplay.

(Dave Baker, my compadre asks if you will please send him ‘hate mail’ if you disagree, his email is on his website)

The article and link below will show you how very ignorant the liberal American/Black Community really is. It is not that people “hate” Prez. Hussein O., girls and boys.  It is that we absolutely DETEST his broadening the Bush regime policies with spending out of control, national socialized ‘healthcare’ that is already jacking up the price of insurance. Umpteen executive orders against the will of the people, ETC..

He refuses to show America just who the hell he is. He goes on vacation every other week.  Need I go on?  Below, this article, I will show you Obamas own words against the ‘evil’ white guy and whites in general..

It is that fact that a President should not have said this type of thing in the first place.  Obama & his Pastor both attribute to  Black Liberation Theology, in its Founder’s Words : NPR NO President should belong to an ORG such as this. Would it have been OK if Clinton or Bush were KKK? No. Why does Prez. Hussein O get a pass?  Because the DEM party treats blacks like animals, thats why. They do not hold them accountable, and that is how one would treat an animal because an animal does not know better. And, again, I tell you- they call American Christians and conservatives the ‘racists?’  HA…HA…HA. Sure..

Angelo Cataldi asked Obama about his Tuesday morning speech on race at the National Constitution Center in which he referenced his own white grandmother and her prejudice.   Obama told Cataldi that “The point I was making was not that my grandmother harbors any racial animosity, but that she is a typical white person. If she sees somebody on the street that she doesn’t know – there’s a reaction in her that’s been bred into our experiences that don’t go away and sometimes come out in the wrong way and that’s just the nature of race in our society. We have to break through it. What makes me optimistic is you see each generation feeling less like that. And that’s pretty powerful stuff“

That’s just how white folks will do you,” Obama writes. “It wasn’t merely the cruelty involved; I was learning that black people could be mean and then some. It was a particular brand of arrogance, an obtuseness in otherwise sane people that brought forth our bitter laughter. It was as if whites didn’t know they were being cruel in the first place. Or at least thought you deserving of their scorn.

President Obama waded into the national race debate in an unlikely setting and with an unusual choice of words: telling daytime talk show hosts that African-Americans are “sort of a mongrel people.”

Mongrel:  a dog of mixed or indeterminate breed.

FOUND!! Copy this ASAP, make a video, ASAP on your computers. PLEASE!!

Dr. Ezekiel Emanuel, health adviser to Obama. Read all you can on Emanuel and decide for your self if they will be Death Panels on ObamaCare.