“Fever Detecting” Cams & Drones In Our Future. WHY?!

I’ll tell you why.  When I was about 20 years old, my workplace informed all of us that we would be getting health insurance. This was 1986.  I remember going home to tell my family that I was pissed off that the workplace would be taking out $17.34 out of each paycheck.  So, I opted out.  My family went NUTS.

Already, by 1986, the nation was getting on board with the whole health insurance scam.  One of my family members told me I was insane for opting out.  I didn’t care. Back then, we went to Doctors on Duty.  It was $45-$50 for them to treat you and send you home with your anti biotic or a shot.  $50—That’s it.

NOBODY CARED ABOUT THIS INSANITY BEFORE 1986.

Now, its our whole life.  There are hands all over the pot of gold called health insurance plus big pharma.  Health Insurance and Pharma ARE the biggest manufactured money-makers in the world.  In my opinion, its a death cult.  Because the ‘powers that be’ don’t give a rats ass about YOUR health… They care about the MONEY, money, money.

They have a pill for every damned thing now.  Since people are onto ‘big pharma’..  The ‘powers that be’ had to do something else.  What did they do? Invent viruses, flus, sinus infections,  worser viruses, super bugs….then, they package diseases and dump the illnesses on everyone to keep pharma going.  We only got the cold when I was a kid.  Flus and viruses were rare.

Now, they will have drones to detect if you might have a fever.  They have to keep that money pot going, don’t they?  Since people are into health foods and holistic  medicine, they will SHOVE the drones and cams on you, forcing you to the Doctor.  It’s NO accident that hundreds of great holistic Doctors are just ‘dead’, out of no where:  Kill em all so people HAVE to go to the big pharma Doctors.  We’re stuck with these big pharma Physicians and their bed buddy health insurance companies with their ‘all seeing’ eye cams and vision drones.

Its not a conspiracy, it’s the truth. This is what has happened.

Look at the google search for these fever detecting cams and drones.

FACT: If Ted Cruz Ran for Prez Today, He Would Have 68 Million Votes

But, not everyone is like me.  In fact, most people are NOT like me.  People care very much over the loss of their health insurance.  The rise in rates.  Being sick in the hospital scares the hell out of most Americans.  Heck, it scares anyone.  But, Americans are a thin-skinned bunch who care more for their own ass than country.  Thats the facts.

Another fact is that Cruz may not be natural born.  I don’t know yet, have not looked into it.  But, that will not matter to Americans.   BUT-I retain that we are the most selfish lot in the history of the world.  Country takes a back burner to our precious hides.  People will care for their health, first.

At any rate-The tally of the discontinued insured is not even in yet, but many experts believe that the loss is staggering.  So, face the facts, Democrat Communists:  Your Obama-care is the biggest clusterf*ck of the century–worse than prohibition.  You won VA with fraud (again) by donating to the Leftist Libertarian, but it won’t work next time around in the presidency.  Not a chance. UNLESS you pull a complete hoax–which I would expect.

Also- At least 3.5 million people have had their health insurance Discontinued … –

Who cares if the govt shuts down.  Do you care anymore?  The leftists and these phoney liberal-Republicans have completely destroyed our country.  If they shut the govt, the WHOLE WORLD will be happy.  Believe you, me, they will.  It’s not ‘affordable’ healthcare at all.  Our insurance used to go up a little every year, now it’s hundreds and hundreds since the ins. co’s are preparing for this SNAFU.
Read it: here 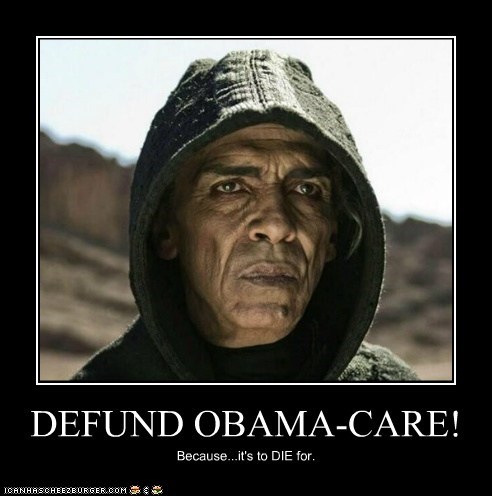 These people are so stupid @ D.U., it’s totally unbelievable. As usual, the left wing cannot see that it is themselves that are the Nazi-Fascists. They cannot see that the government is the Nazi, with their National/Socialized “Healthcare”. They cannot see the persecutions that they bring TO people of the Christian faith.  They are projecting themselves & their own evil, onto good-meaning people of faith. When you only look for evil in people, you will find it. However, one does not have to look far, when watching the fake ‘tolerence’ of leftist/Marxists.

(I take note that these useless idiots seem to forget that Hitler WAS a SOCIALIST, this is what the LEFT embraces, NOT the right, or Christians.)

They cannot see & REFUSE to see that they are the ones that want God removed. The removal of God means COMMUNISM. Communism means genocide and death. These people are so damned blind, I see no hope.

I notice that Islam is OK, though.. Islam is fine, Islam is a ‘cool religion’, but Christians are “NAZIS”.  Islam and the ‘tolerent’ leftists…Strange bedfellows? No, just mentally deranged..

(Link:)  The Left is the one that is with radical Islam, with their support for a mosque @ G. Zero. This is what they support down below (“God Bless HITLER”) yet, it is the ‘Right-Wing, Religious who are a Danger’~koo koo, koo koo

Commenter:
They have not come right out and said it in this article, but the parallels to the rise of the nazi party are striking if you’ve read any history on the movement.
Commenter:
Hitler got his chance when, because of fear of the left and a hatred for socialists (real ones, not imaginary ones like in the US today), greedy conservatives embraced Hitler’s far-right NSDAP and made him acceptable.
0.000000 0.000000

I dont know who can possibly take MMFA serious. We have a war going on, on the borders in the Southwest states, and terror ties in the Northeastern states from Canuckistan, and MMFA once again LIES to its sheep readers. This PDF File, below is loaded and packed with information regarding this horrible situation, it you will take note; This PDF was written by PHD. Cosman in 2005. The scenerio is much worse NOW.

This story below is written by

MMFA is bringing America into serious danger with its LIES and misleading it’s readers terribly.  I almost feel sorry now for these misguided fools. Just so you readers over there know..You do not have PHD’s in Science or Medicine, you are lying bloggers.

Leprosy, a scourge in Biblical days and in medieval Europe, so horribly destroys flesh and faces it was called the  disease of the soul.. Lepers quarantined in leprosaria sounded noisemakers when they ventured out to warn people to stay far away. Leprosy, Hansens disease, was so rare inAmerica that in 40 years only 900 people were afflicted. Suddenly, in the past three years America has more than 7,000 cases of leprosy. Leprosy now is endemic to northeasternstates because illegal aliens and other immigrants brought leprosy from India, Brazil, the Caribbean, and Mexico.

See this as well, I reported on this before: OUTBREAK: Leprosy in Arkansas – Brought There by Whom? And should every illegal take a health screening test?

I just want you ALL to know, that these are the people you will be providing Obama-Care for, to take care of their nasty asses.  Don’t say us ‘right wing crazies’ didn’t warn you.

You jerk-Soviet leftist whores have made our hell, you’ll pay…Soon..

Oh, BTW: its not being anti-‘gay’, it is the lack of decency that has been coming from this community for over 15 years- (Which Conservative gays knows very well about) You can stand for your beliefs and still love a person, does not mean you have to agree with the ‘life-style.’ Homosexual friends of ours love my brassiness, but not my anger.. So? Agree to disagree.

Go take this poll, it is all over the Soviet/Liberals Blogs. They have hijacked this “Poll”

SEE?  Thank you for voting!

Unsure. I agree that the health insurance industry needs reform, but is this the answer? 3% (20,525 votes)