Every State W/ Major #VoterFraud, Obama & Holder Call “Target” States On their Website: “All On The Line”

Every state this election year that had major fraud, Obama, Holder & their staff were working in and they TARGETED. Can you explain to me why a former President and a former Attny General are working in these states? Who does that? I haven’t seen other retired Presidents doing anything like this.

On the website below this YT video, you will see all of the ‘target states’ on the Tabs. In the video, you will hear Holder saying: “Vote, Vote, Vote”, “Vote Early”, We HAVE TO CHANGE it”. Change what? We VOTE, we don’t just “CHANGE” it.. Not only are the Democrats ‘flipping our states’ but were/are very interested in the ‘votes’ there. My own state AZ has—since 2018, flipped BLUE. In 2018, there was major voter fraud in my state: AZ, 2018: Martha McSally Won Election. But, The DNC “Found” Votes . Just like this presidential election year.

Call me suspicious but why is every state that they targeted on this website under ‘target states’ just seem to be THE states suffering from Democrat voter fraud???

This Youtube was posted on Oct 2020.. Just in time to confuse the election.

By the way.. I have no thoughts of suicide. Suicide is murder against ones own self. Its against God and against my faith.

Mexico does not just ‘allow’ people to come in to their country.  They are not as stupid as we are.  Yet, thousands of illegals are traveling through Mexico.  It’s because Mexico has been given the word from the Negro in charge to let them through to America where they will become immediate citizens – courtesy of the trash that occupies the White house.

In May, Eric Holder forced schools to give the children of illegal aliens a ‘type’ of citizenship: Obama Admin to Public Schools: You Must Enroll  Illegal Children (TOWNHALL) …

SO- These sonofab’tches may not have signed amnesty into law, but they have already granted amnesty.  You look at the news today and tell me they didn’t.    Look at these pictures from the last few days.   The FACT that this sick, insane government wants to send the DHS to Central America to ‘process’ illegals means:

Sure don't look like a bunch of children here to me??? pic.twitter.com/QdxM7avInz

Hundreds of thousands of these greasers are on trains to come to the broke USSA.. This started in droves after Holder’s May statement.

Holder Says 'Taking Our Country Back' Is Racist … But Remember When Liberals Used to Say It? | http://t.co/64OJO1SjdL

It’s time for war.  It is time to start shooting.

TV Morons: You Dont GET It. Obama/Holder LOVE This National Racial Disunity & Hatred.

Many TV morons are advising Obama to stop this violence from the Zimmerman verdict results..

If the Commie-left didn’t adore this air of animosity, they would report race/hate crimes against whites & black on black crime.  But, they don’t.  And, they are in Obama’s pocket or at least in bed with this admin.  Obama and Holder are Communist/Marxists.  End of story.  They have LIVED for this moment all of their lives.  They are radical Revolutionaries.  They WANT a war.  Race war, Capitalist war, any ‘ole war will do.  They just want a war within.  Look at what they’ve done to the Middle East—far worse than even Bush.

Many anti Communists have reported on the past lives of these enemies of America, but so many people keep insisting that Obama is a “Liberal” Democrat.  No, he is not.  And I am so sick of people saying this.  He is a COMMUNIST and was raised BY Communists. Any idiot can look into the past lives of Obama, Holder, et al and see this.  People choose not to.

The other night, when I asked one of my long-time friends what she thought of this Zimmerman case, also the Texas abortion bill, she said; “ITS ALL NONSENSE AND I DON’T WANT TO TALK ABOUT IT.”   I, of course, let it go, she’s been a friend a long time, but nothing much matters to her except her family.  If something, God forbid, should happen to her family, though–then, it will become important.  This is the TYPICAL American mindset.  It is.  I do love my friend, but, she is uncaring of anything that does not relate to her family.  In my opinion, she has lost her heart and soul.  She used to be a caring individual.

This is your country: Filled with people who don’t give a damn about anything but their own precious hides.  So, Obama is a mirrored reflection of most Americans.  When they look at this phoney jackass, they hate HIM because they see themselves, not because they looked into this bastards life.  So, let these miscreants keep up their dirty deeds, the ghetto blacks rioting in phoney rage, the MSM saying nothing and their Chief sitting back laughing his ass off….In my opinion, we deserve it.

Its not going to stop until America REPENTS and wises up.  Holder went scot free from the AP scandal. Ditto Obama with IRS & Benghazi just as I predicted.

Like Loading...
Email Sent To White/ Hispanic-Hating DOJ By A Twitterer Re Holder’s Anti Acceptance Of #Zimmerman Verdict:
`

My friend, Chris – is not American.   He is from EU and he is SICK of Obama, Holder and Hitlery the WITCH.

Most of all, he is tired of seeing this race-baiting crap from Commie Liberals.  Here is his personal response to the DOJ:

…And, this is EXACTLY how you are supposed to address Commie-fascist scum…Now, do YOUR part: Copy this letter and send it to the white hating/Hispanian-hating, America hating DOJ.

Do You Hear Crickets Chirping? I Do, #Benghazi Is As We Said Here, Gone With The Wind-Forgotten

The last  activity for Benghazi on the internet was May 14, 2013:  Benghazi, IRS hearings.   What is terrible about this Libya scenario is that the Mothers of the Benghazi terrorist attack will never receive justice.  Even more tragic,  they were  probably staunch Obama supporters.

I don’t care for GWBush, but if this was Bush, this would have been front page news, day in and day out.

And now, American people only care about the IRS scandal. Why? Because money means more than murder to Americans.  I advised some folks on my email thread that Obama would use the IRS scandal to distract from Benghazi.  I was right. They laughed at me, but I was right and they were wrong-sadly so.   At any rate,  it looks pretty bad for BO, Holder and Company.  BUT-My guess is they will get away with EVERY scandal because they are black.  I bet AG Holder does not even resign…It would be racist to ashcan the AG or demand he resigns.  If Eric Holder was white, he would have been gone faster than you could say Jack Robinson.  Trent Lott resigned over much less. As did R. H. Nixon.

Obama will never be a decent enough person to step down and neither will Holder.. I could be wrong, but I don’t think so.  Nixon was a better man than Obama.

The DNC does not hold its blacks in office to account, they treat them like animals. Just look at Rangal, Dinkins, (Mayor NYC),Maxine Waters, Sheila Jackson Lee (All abusers of power AND the race card etc..)  If all of these present scandals disappear in the next week or so, you will know I was correct.

I also bet any person $50- that NOTHING will happen to Obama, Holder, or Hillary.   In fact, Hillary will probably run for Prez and America will elect the bitch.

God bless America.  NO other nation like us…Even the Islamo 3rd world dumps have it more together.  You know I’m right.

AND….Guess what else, kids….the IRS scandal will be forgotten in about 9 days. The AP SNAFU with James Rosen is almost over.  The Internet is an enemy to true journalism at this point.  The Communist DNC will not EVER hold any of their Komrades to account, especially blacks.  It is going to be a LONG 3 more years.

PRIVILEGED TO BE BLACK: Molotov Mitchell Mocks University’s White-Guilt Campaign.. You can ask almost ANY white person in Amerika of the racism directed at them, they all have a story about it.  I know all about it. Donna knows all about it. My whole family knows all about it.    The racism is directed at WHITE PEOPLE, now.   And has been for 30 years.   Serious racism; rapings, beatings, robbings, murder.  But, it is never a hate/racial-crime when a person of ‘color’ does it, because we are all  ‘oppressors.’  Bullshit.   Ya’all walk a mile in my shoes; Portugee-Jew, Iroquois/Aryan-Christian.  I was doomed at birth… 😀

BTW: I notice that the Black Panthers can threaten to murder ‘pink people’ and that’s OK.. Watch some Aryan Bro’hood say that shit about a black or a Mexican, he would be in the slammer by now.

Like Loading...
H/T: Mr. Werth~ Our racist Prez and his brotha, Holder-the black-panther loving stooge are in cahoots with Fast & Furious…Where is the GOP??? As usual, the GOP is MIA, going along to get along.. The truth:  If Obama & Holder were WHITE MEN, they would be fired.  Think what you want, but you know I am RIGHT.
–
Picture evidence from: 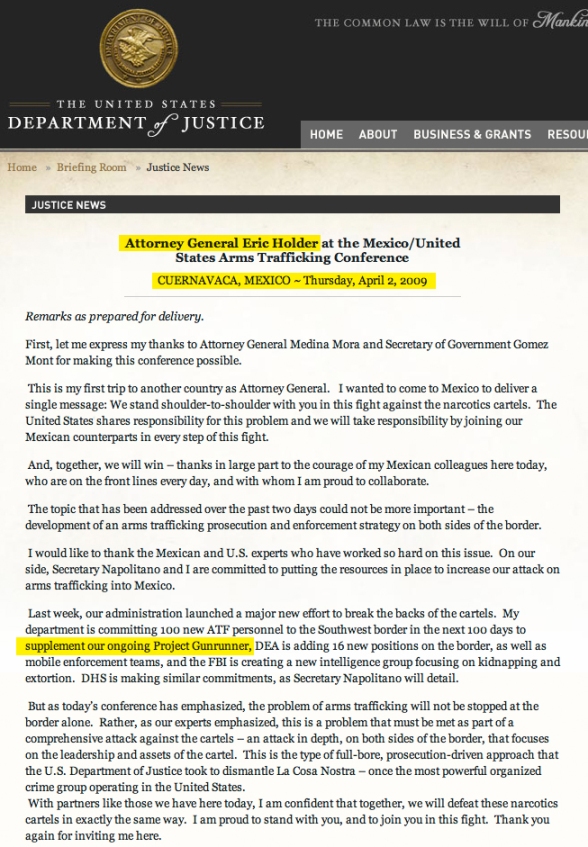 The DHS refuses to report the black terrorist flash mobs, and News stations refuse to report these crimes as racial-this is dangerous to white Americans, because those not ‘in the know’ will NOT know who their attackers are.

By the way: The Norway massacre happened in NORWAY, not here.  Jared Loughner was a leftist who read the Communist Manifesto and Mein Kampf, he had an affinity for men.  Not a conservative American.

Why? Because the DHS is evil and racist against white people, thanks to the HNIC, Eric Holder.

The only thing ‘suspicious’ is Obama, Holder and Napolitano., PERIOD!