I believe so. But, I’m not God..And could be wrong. However, I totally believe we’re ‘in’ the last days and anything is possible since satan is out on the loose and the beast system is in full swing.

It ALL started in China (with the lockdowns) and here it is again with Shanghai: Shanghai extends covid lockdown “indefinitely,” sparking rebellion

CNN is vamping it up also: As usual. In fact, most of the fake news media is propping it all up.

Philadelphia is re-instituting an indoor mask mandate because its feckless leaders think that will somehow stop or slow the spread of Covid. Philadelphians would do well to just ignore these tyrannical, ignorant clowns.

If it does happen, prepare for the Mask fascists and the Needle Nazis. Stay away from them.

Austria Is Locking Down All Of Their Jews…. (I Mean Unvaccinated)

Plenty of people are saying: “Well, the unvaccinated are ‘spreading the pandemic’, so ‘lock them up’. These idiots are ADMITTING that the vaccine does not work and if they admit this, then they would have to admit that the Unvaxxed are being unjustly persecuted.

The Leftists are totalitarian scum. End of story. Who the hell in the history of the world separated people like this? Nazis & Communists do, that’s who.

Leftists are scared to die because they don’t know God. They inwardly know they’re hell-bound.

Apartheid is Apartheid, segregation is segregation. They put sanctions on Rhodesia, South Africa for Apartheid but the West now implements this….Fork the lying West, absolute, ABSOLUTE Hypocrites. They put Germans on trials as recently as 5 years back for implementing this in Germany in the 30s/40s yet today they all sit on the sidelines implementing the EXACT same system. HYPOCRITES the lot of them.

Jacinda Ardern, the paranoid, schizo Prime Minister Of NZ is locking up Zealanders and she doesn’t even want them to talk to their neighbors. Only a Pot Smoking loser is this paranoid.

“KEEP TO YOUR BUBBLES, dummies!

We got ONE case of Covid!”

CHECK OUT THIS VIDEO: Tyranny-Tranny Prime Minister of New Zealand on Crack!

Below–Aren’t they precious?  All except one are not wearing their Sharia Covid mask: 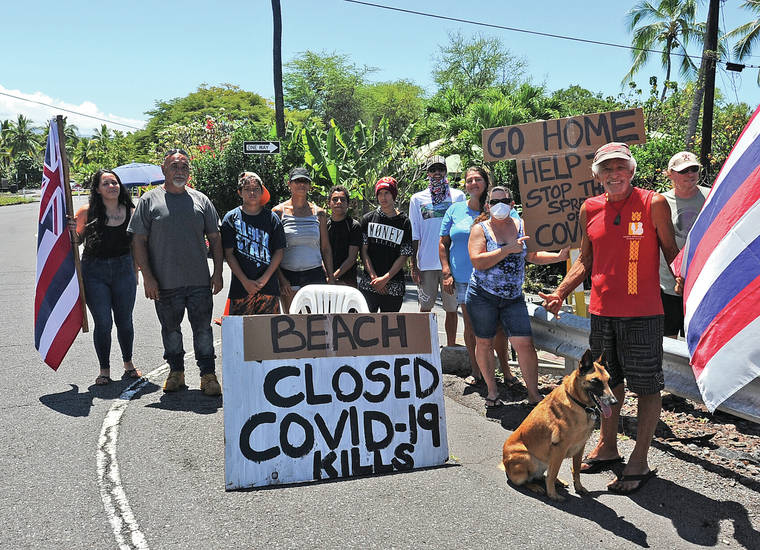 A traveler visiting fascist Hawaii from Commie NYC posted photos of Hawaii and the beach at night.  Fascists in HI have ordered that anyone coming to HI must stay on a 14 day quarantine.

The dude was ALONE at night.  Nobody around him.  He was probably hooked up to his ‘smart’ phone which already traces your IP and whereabouts. Isn’t that peachy?  Thank God I never got a ‘smart’ dumb phone..

This is the type of world the radical left Communist-Globalist-Nazi-brigade want Americans to live in.  Leftists in HI probably love this insanity.  They’ll comply with just about anything.  People living off the govt dole in HI make over 60K a year.

As of Friday, Hawaii reported one new case of COVID-19, bringing the statewide total to 638 cases and 17 deaths.   All of it here: 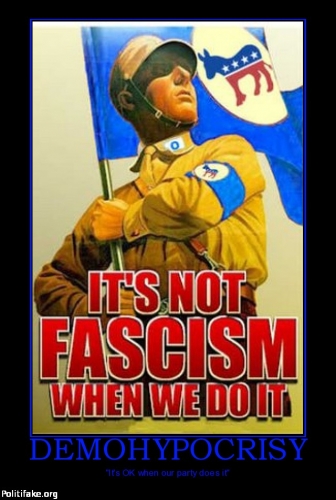 Leftist Gestapo Bastards & their Hitlerian Governor, Furor-ette Kate Brown are putting this Salon owner thru hell.   In a SANE world, the sick are quarantined, not the healthy.

Salem salon owner who defied state orders and reopened said Thursday night OSHA has fined her $14,000 and forced her to close.

WA Governor: COVID-Test-Deniers Will Not Be Allowed To Leave Home To Get Groceries

Zero Hedge said: “Who could not have seen this coming?”

Well… I have to say…This is Poetic Justice about now, in this slot of time.  The Left wants fascists and totalitarians running the show and they’re getting it–full blast.

Barbra Streisand claims she does not want to ‘go back to normal’: On Deadline. Well, Babs is getting her ‘no return to normal‘.   Locked up in Malibu until August, lol.   😀     Singing in the shower.

You can read this whole story about WA State on ZH:  Islee is a fascist monster.

#CDC Falsifying – You’re Being LIED To About #COVID19 Deaths. Question Everything:

I just woke up. I am seriously tired because I have not been to the gym in weeks, like most of you.  Inaction makes me so sleepy.  At any rate, this is what was in my news feed about the Covid19.

This is totally unbelievable:  Gateway Pundit- CDC Tells Hospitals to List COVID-19 as Cause of Death Even if It’s “Assumed to Have Caused Or Contributed to Death” – Lab Tests Not Required

1/ As you sit home watching #COVID death counts spiral, please know the official @CDCgov guidance for coding COVID-related deaths is as follows: any death where the disease “caused or is *assumed* to have caused or *contributed to* death.” Confirmed lab tests are not required… pic.twitter.com/H4D6mcti3R

Actually, on second thought, just skip the swab. Per @cdcgov: “Ideally, testing for COVID-19 should be conducted…” but hey, if you don’t have time and feel like saying the guy died of COVID-19, that’s cool too! pic.twitter.com/0u0qtEWCtP 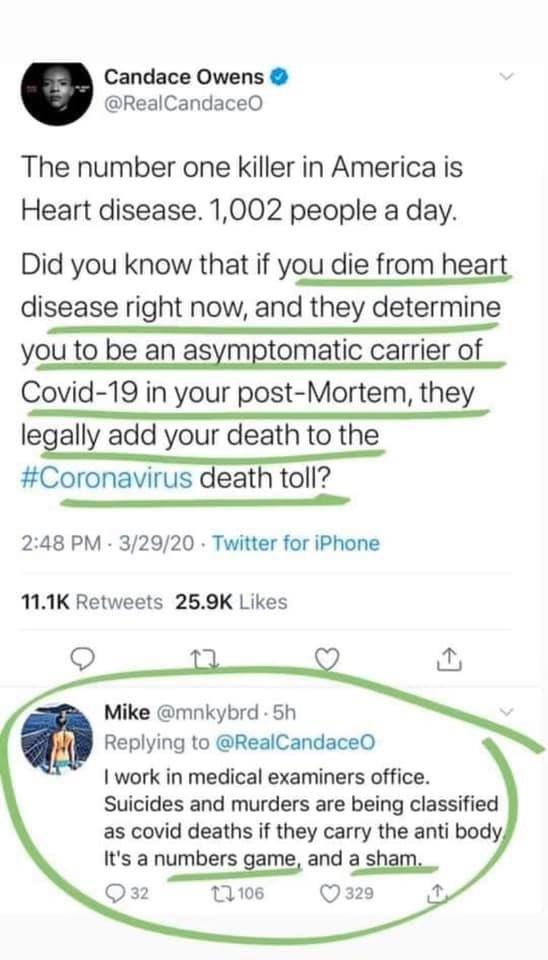 Until last week: 83-year-old in heart failure gets a cold, dies in his sleep: he died of CHF. So what if he had the flu for two days? Who even knows? Now: What if he died of #COVID? Swab that corpse! We must know! But not so the numbers look as large as possible. For science. https://t.co/smrwQdzlqu

What kind of a sonofabitch would do such a thing?  What type animal walks among us that needs to LIE about how people died for an agenda?  What the hell agenda is this?