…It shall come to pass afterwards that I will pour out my Spirit upon all flesh; and your sons and your daughters shall prophesy, your old men shall dream dreams, your young men shall see visions.

This dream was about 1 year ago: I was with my closest friend, we were in Monterey, California. We had been invited to a large party consisting of wealthy people. As we began to walk up the driveway, we looked down into the valley (Carmel Valley) At first we thought we saw an army of ants, it was that large in number. In dreams, at times, you are given x-ray vision.  But, the closer we looked, we saw thousands of troops, with ak-47 type guns, they were running through every field and path in Calif. We began to run up to the house we were going to-(where the party was) the house was on top of a hill. But, as we got to the top of the hill, we realized that even up there, we would not be safe. We prayed. Then God showed us where to run to- (ASIANS) China & N. Korea were invading Calif. & killing everything in their path.

This dream was about 8 mos ago: I was in a port in San Diego. The day was nice, there were lots of yachts, large boats. It was such a nice day, I was in a speed-boat.  OUT OF NOWHERE, a large Asian (possibly Chinese ship) showed up. I knew it was an enemy ship, that came to the West Coast to start their slaughter.. I saw the flags, they were Communist flags. I looked in the ship that was passing by, it was so large, full of Asian troops coming here to slaughter. I had a gun at my side. All of the sudden, I watched as an “American” jumped on board of the Chinese/Asian ship, then proceeded to come back into my boat. I was grieved. I was so distraught, because this was a supposed “American” that had joined the Chinese, even put on their uniform, then came back into my boat.  I realized that I had to kill him.  He had turned on America, aligning with these Chinese/Asians, who had come to destroy.

Arrogant America. Pompous America. Thinking that we are exempt. Well we aren’t. Last Nov. Chinese fired into San Diego. Everyone saw it and ignored it like the sleeping, dead America has become.  Judgement is come and you pay no attention to anything but Anthony’s Weiner.

Here is a vision/dream a Christian lady had:

…It shall come to pass afterwards that I will pour out my Spirit upon all flesh; and your sons and your daughters shall prophesy, your old men shall dream dreams, your young men shall see visions.

I was in my backyard in Queens, NYC (Where I used to live).  I heard a loud noise, I had never heard this type noise in my life. I looked up and above my head, maybe 100 feet, were rockets flying over the house, getting ready to explode. Foreign enemy has invaded America. I watched one hit a house and the house was immediately on fire and exploded. Rocket after rocket flying through the shy, (like the ones we have seen fly into Israel from the peace-filled palis)  Instinctively, I knew; Just get the hell out of the way because the next one was coming, destroying everything in its path. One hit and exploded close to me. I was not crying, I was not screaming, I was trying to figure out how the hell to get out of the way of the next one, and the next one, and the next one…. Dream ended.

Then, another dream happened.  Now, I am living in AZ (during the dream).  I go outside, it is a nice day, not a cloud in the sky. Suddenly, I hear the sound I had heard in NYC. I thought I was safe way up in these mountains… I wasn’t.  A foreign enemy has invaded America.  I looked up, about 200 feet above.. There were rockets soaring through the air, hitting targets just a little south of me.  All I could think was: Where the hell do I go? Where can we all go? These rockets will hit anywhere, anyplace, anytime.  Rockets filled the skies.  Dread was all I felt, besides thinking of survival.  Dream Ended.

It is an arrogant nation that assumes these things cannot happen here. And we are arrogant, without humility before the GOD who rides the waters, who rides the clouds.  We have forsaken HIM….And now, he WILL forsake us.  We have allowed an unrighteous leader: darker and even more sinister than his predecessors before him. We have allowed this very evil, sub-human, Obama to rule over us. We do nothing while he has signed 80 executive orders against the will of the people. Started another war in Libya against the 60 day UN Resolution. Fraudulently released a phoney birth certificate. Demanded Israel go back to ’67 lines’ whatever the PSYCHOPATH meant by that.  Allowed the repeal of DADT (‘gays’ to serve openly, militantly) in our military. Passed an INSANE ‘healthcare’  in which he has waivered  1000 plus ‘favorites’ of his, and.. STILL WE DO NOTHING TO REMOVE THE EVIL.

Psalms 109:8 says, ‘Let his days be few; and let another take his office.’ The citation is being passed around the Internet as a rallying cry against President Obama.
The verse immediately following the psalm referenced is a bit more ominous: “Let his children be fatherless, and his wife a widow. Let his children wander about and beg; and let them seek sustenance far from their ruined homes” (vv. 9-10).

Americans in the millions should pray to God for intervention and rid Satan’s Plague from their Continent.

…And it shall come to pass afterwards that I will pour out my Spirit upon all flesh; and your sons and your daughters shall prophesy, your old men shall dream dreams, your young men shall see visions.

I was in a Victorian style town, just walking, minding my own business, observing the shops and restaurants. Day turned into night and it seems that I was living there now.  Somehow, I ended up at this theatre. I was in an upstairs room. There were only windows, and 2 panels that were really thick, inotherwords, there was no way out of this room. NONE.  I began to hear a rally downstairs. In this rally, I knew instinctively there were leftists crying ‘revolution’, there were Moslems shouting “Allahu Ackbaar” and there were Neo-Nazis chanting “Hail Hitler” and some other atrocites in German. Sure, I was scared. I am a Jewish Christian, seriously hated, they hate me for my Jewry, they hate me for my Christianity. I was scared.  I began to pray, what else could I do?  I was thinking; “It is a matter of time before they come up here to possibly murder me”.  All of the sudden, one of the panels (THICK) that was like a door, opened. I was scared to go look, because it could be one of satans people, named above that were perhaps coming to this room now.  I gently looked outside, as I looked outside, there was NOBODY there, the only ‘entity’ was the sun, in all of its glory, shining through a rainbow in the doorway.  I walked out–FREE.  FREE. FREE.  There was nobody there, GOD HIMSELF OPENED THIS PANEL/DOOR for me to walk into safety. I was walking away, I can remember taking caution. I was so joyous. GOD had SAVED ME.  I walked on…and on…and on. GOD with me, in the bright of the day.  As I walked, I could hear their evil chants.  I, however, was safe from these murdering bastards.

Hear me well, Christian haters, Israel haters, Jew-haters (NOT left wing-Jews, satans kids) It is not OUR days that are numbered: IT IS YOURS.  God will obliterate you. We WILL watch as he obliterates you with; tornados, floods, earthquakes, diseases, plagues. Every terror imaginable from the almighty IS coming upon you.  YOUR END IS COMING. Deliverance of GODS people is HERE. We will laugh at your destruction, for you mocked our God and played the fool.   God will not be mocked, he WILL destroy HIS enemies.

REPENT OR GO TO HELL.

I believe in dreams from God, or ‘messages in the night’ ~  ‘And it shall come to pass after this, that I will pour out my spirit upon all flesh: and your sons and your daughters shall prophesy: your old men shall dream dreams, and your young men shall see visions.’   -Joel 2:28

I was outside, it was very dark. It was not only dark as in opposite of light, it was dark as in sin.  I saw so many people, in unison, standing against God. Standing against what God calls good. All walks of life had utterly forsaken God. It was as the tower of Babel, in its unison. (God seperated all of the peoples of the earth at Babel, it is the satanists that are seeking an UNGODLY unison)  I then heard a voice, or an impression on my heart or mind.  “Look up to the sky”.  I looked up. I have never seen a real, live volcano.  But, when I looked up to the sky, it was overtaken by a massive volcano that spewed out fire, lava, and burned those that dwelt on the earth. Nuke? I dont know. Supernatural bomb? I dont know. Only God knows. 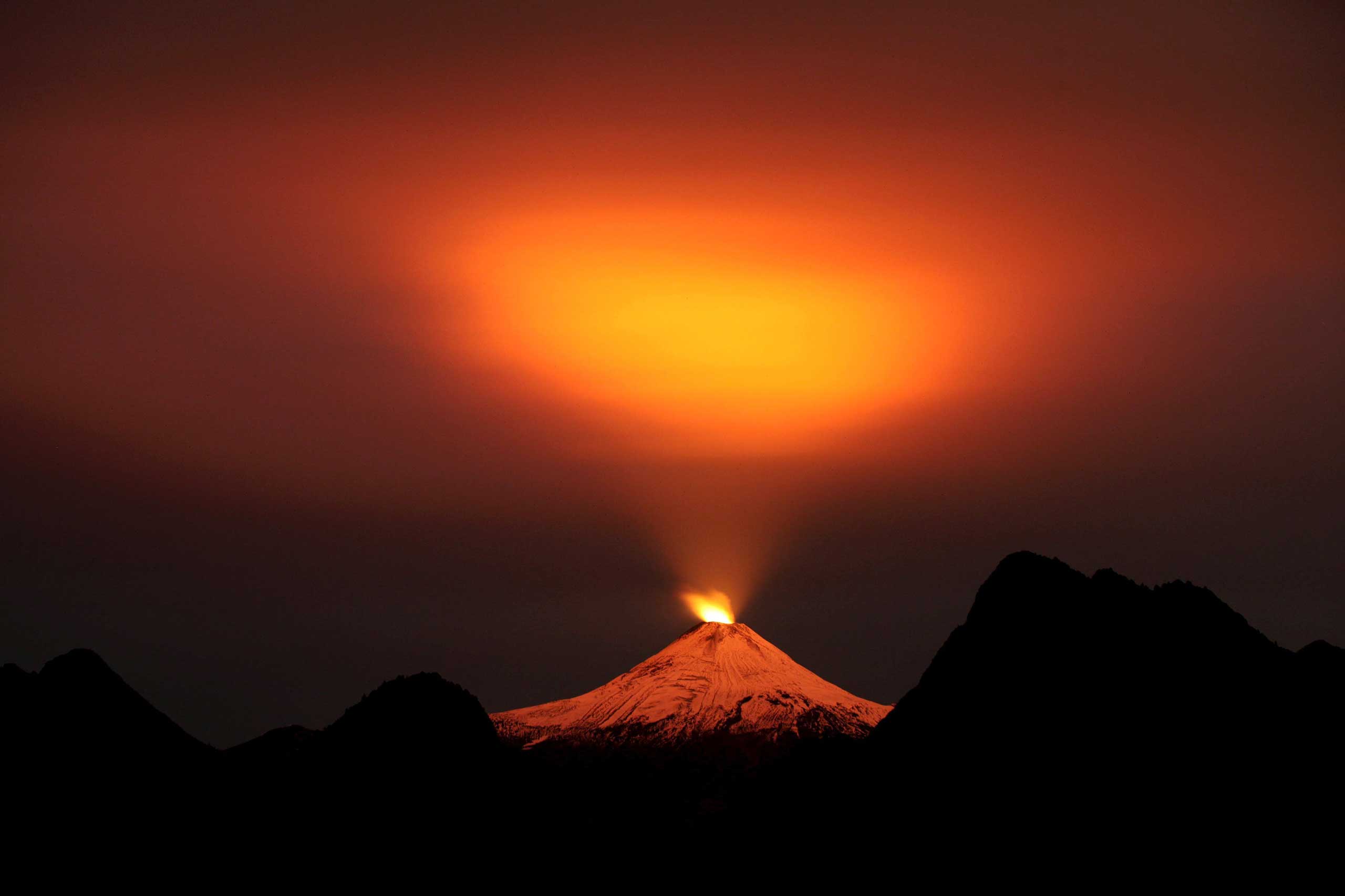 All I can say is, we need to repent.  Repent from our Tower of Babel mindset. Allowing leftists (satanists) dictate to us what is right vs wrong. The BIBLE has the answers from the Torah, to the Tanakh, to the New Testament.  Turn to God, people. Turn back to GOD, before it is too late, and we/you/all of us will not be able to turn back any longer, for he will NOT hear us because the sin and abomination is so wicked.