Why was it OK for Bill Clinton to go to Russia and give them 10 billion dollars and get drunk with Boris Yeltsin? Why was it OK for Hillary to bring a reset button and HIT the reset button? But, Trump who does nothing with Russia at all makes the Leftist media whine about Russia, day and night–and then some. Remember how Obama whispered in Medvedev’s ear? The Leftists didnt care at all about that either!

IT ONLY BOTHERS THEM WHEN TRUMP IS PRESIDENT.

I think Maddow is scared of the ol Russian Sausage that Putin seems to possess.. Lol. Lesbians are scared of the alpha male type. And, Putin is ALL THAT & more! HAHAH.

I can hear Putin saying to Maddow…

‘Come here babay.. I can make you straight again..‘

Get a grip, Maddow.

About 10 days ago, Snowden was to release some information about our beloved Obama administration.. People keep saying it is Russia that is the aggressor.. Really?   What American did Russia kidnap? None.  They gave safe haven to a whistle blower who is revealing NSA secrets.  Some people consider Snowden to be a traitor, others believe he is a patriot.  At any rate; Looks like the paranoid, insane Obama admin can’t sleep at night if they don’t capture Snowden.

It is not Russia that started this ‘cold war.’ It was John McCain, Obama, Murphy, & Nuland.  That’s the facts.

Moscow considers the kidnapping “a new hostile move by Washington,” and accused the US of ignoring proper procedure in dealing with foreign nationals suspected of crimes.

Obama is playing a dangerous game.  One which he has not mastered the skill.  Russians & Asians play chess, not checkers. 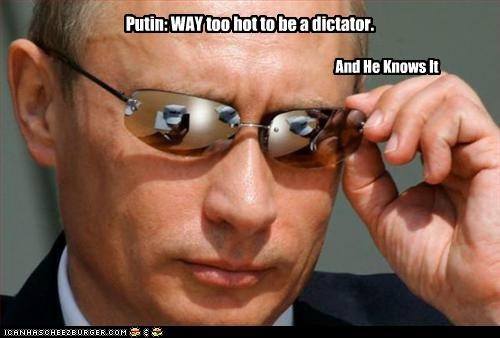 Why should we have expected that the American, state-run media would have reported something positive about Vladimir Putin?? According to the MSM Conservatives and Liberals, Putin is still the KGB king, a xeno-phobe, an evil, slobbering monster who keeps children locked up in the gulags of Southern Russia.  We are not ‘rah rah rah’ Russia-supporters here as much as we are anti-US meddling all over the planet.

On Wednesday, Russian President Vladimir Putin made a proposal for ending the violence in Ukraine at an OCSE (Organization for the Cooperation and Security in Europe) in Moscow. Unfortunately, most Americans never heard what he had to say because the media failed to publish his statement. The reason for the omission is fairly obvious, the media doesn’t want people to know that Putin is not the ghoulish, authoritarian caricature he’s portrayed to be, but a levelheaded pragmatist who wants a swift and peaceful resolution to the crisis. Here is what he said:

“We think the most important thing now is to launch direct dialogue, genuine, full-fledged dialogue between the Kiev authorities and representatives of southeast Ukraine. This dialogue could give people from southeast Ukraine the chance to see that their lawful rights in Ukraine really will be guaranteed.”

Does that sound like a bloodthirsty “KGB thug” who’s driven by dreams of territorial expansion and empire-building or does it sound like a responsible leader who wants to facilitate a cease-fire until cooler heads prevail?

The whole story: Right here  (Not in total agreement with this website, cant stand Trotskyite, Noam Chomsky) but excellent article.

And, let me make myself clear about something:  “Russia Today” is an independent Russian website, it is not state run as “Voice of Russia” is.  I do not approve of their constant slander of Israel.  They NEVER look on the other side of the Israeli/Pali issue.  For that, they do not have my approval. There ARE two sides to every story. That’s all.

They do not know how many are dead.  Amazing that CBS is reporting this.  It’s probably because they are seeing the ugly face of fascism.. Its not a pretty sight. Of course, Putin will be blamed for this the same way Obama excessively blames Bush.  At least Putin gave them a vote… THE EU/US NGO sector gave them a Coup D’Etat.

The bloodshed in the town of Krasnoarmeisk occurred hours after dozens of guardsmen shut down voting in a referendum on sovereignty for the region. An Associated Press photographer who witnessed the shooting said two people were seen lying unmoving on the ground and insurgent leader Denis Pushilin was quoted by the ITAR-Tass news agency as saying there were an unspecified number of deaths.

Chaos In Ukraine Is The Fault Of Western Powers Says Moscow. Russia Is RIGHT.

Call me a “Putin sympathizer” ’til you’re blue in the face.  I know the truth regarding this situation… but you are propagandized by Obama & Company & the anti-every-country coalition.

I have followed and reported about Ukraine since Nov 24, 2013.  Others in America have not, yet act as if they are experts in the situation.  Facts are facts:  John McCain, Victoria Nuland, Sen Murphy and Pierre Omidyar are responsible for this chaos, civil war and murder in Ukraine.  No one else is.   Some of you call the opposition to the Western backed fraud government “Pro-Russian.”  They are not ‘pro Russian’ as much as they are anti EU/USA.    Gee, I wonder why…Is it because we did such a wonderful job in Egypt?  Libya? Syria?   Russia is right, the west is wrong and this is a SNAFU that will probably add to the WWIII mess that Obama will need to ‘wag the dog’ us into war so that he will not have to face the music regarding Benghazi.

Some are saying that Russia Today is putting out propaganda regarding the neo Nazi parade:  That they are not neo Nazi’s… Really?

What in the hell is this?

"Glory to my grandfather in Treblinka!" Orginized and coordinated Odessa fires http://t.co/okyglCoiFR and /ozzy_123 pic.twitter.com/chbEkehkvN 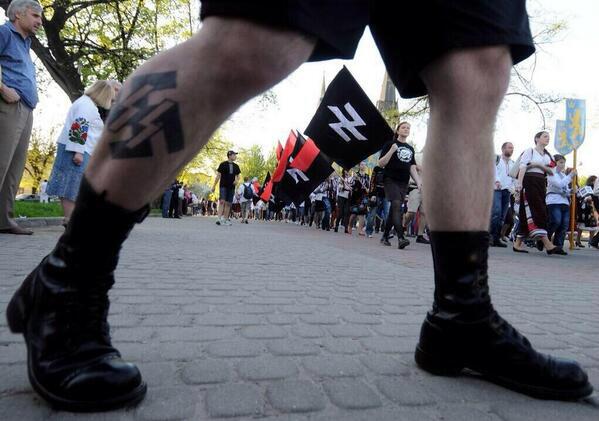 True patriots call out their country when it has gone completely rogue.  Others sit on their fat duff in false patriotism. 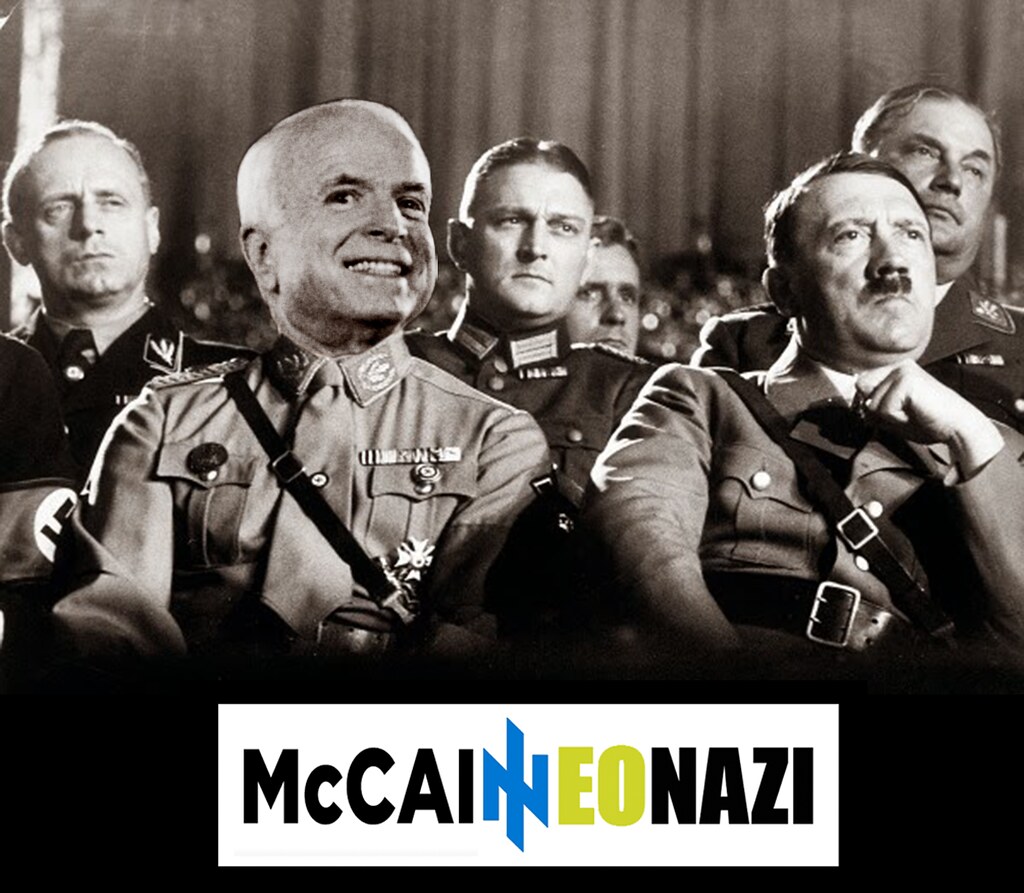 Under Vladimir Putin since he took the reins of government from drunken Boris Yeltsin after traitor Gorbachev had to flee Moscow and arselick his American and British masters.

Russian heavy industry, flush with internal and external orders, is backed up from 12-18 months, working 3 shifts 7 days a week. Stop and think about that. Metallurgists, industrial engineers, mechnical engineers, electrical engineers are in extremely short supply. Russia IT is huge, growing faster than anywhere else, with hundreds of millions in US and British venture capital flooding in in the past 2 years alone, along side with native Russian capital. Every major IT corporation is here. Microsoft, Intel, Sony, Samsung, Electronic Arts, Google, NVideo and hundreds of others, big and small, as well as the dozens on dozens of native companies

Russia, 2 years ago, implimented a Highly Trained Specialist visa, a 3 year work visa that requires: 1. a minimum yearly salary of 1,920,000R or $60,000 per year and 2. medical insurance and 3. a technical or leadership role.

What is the unemployment rate and would anyone hire me? Well, nation wide, the unemployment rate is hovering at 6%. For technical specialists its less than 4%. In Moscow and the surrounding areas, its 1%! I have had an opening to replace a fired manager, open for 4 months now. Pay is competitive, English language is a must.

Is it safe? Well, compared to last year’s murder rates on the metro system of Moscow and that of London (London’s system is less than half the size of Moscow’s .
Moscow had 11 murders. London, with half the population, 33. NYC higher.)

The British, since 2003 have led the way in immigrating to Russia to farm. British farms are chuck full of bureaucracy and control and tiny parcels, while in Russia, they have been able to work their farms without nearly the same level of government interference and in comparison to a 250 hectare British farm, there are average farms of 3,000 hectares.

Russia offers a sanctuary from gay marriages, gay history months, orgy in the class rooms, no discipline do what you want environment of the modern US/UK.
As a country, Russia is rather more conservative, through no lack of counter effort by the Western liberals, gays and other subversive efforts. The country is primarily Orthodox Christian, with a 1,000 year tradition of Christianity. No, Russians are not looking to convert to one of the tens of thousands of US protestant denominations, sects or cults. What they do offer, is our own rich and humble faith, grown directly out of the very words and actions of the Apostles who under the guidance of Christ created the Orthodox Church.

The God of Israel said, the Rock of Israel spake to me, He that ruleth over men must be just, ruling in the fear of God.” (II Samuel 23:3 KJV)

That, one sees in Russia . Putin revived the Orthodox Church and restored Christian worship.

LBGTs please keep away. Russians do not want your filth, nor your evil. Keep it safe in your Satan America.

See for yourself how beautiful the Russians are from the collage TMJ made a few mos back: