WHY IN THE HELL DOESNT ANYONE IN THE MEDIA ASK WHY JOHN MCCAIN WAS PHOTO’D W/ UKRAINIAN NAZI, OLEH TYAHNYBOK WHEN THE US GOVT INVADED UKRAINE IN 2014?

SEE THIS: Why Does @SenJohnMcCain Have The Ukraine Flag/People On His Twitter Page & Not AZ OR US Flag?

Here is Oleh Tyanyhbok with McCain in 2013:

Here is Victoria Nuland being questioned by Rep Dana Rohrbacher. He asks WHY she funded Nazis in Ukraine:

We’re pro-Israel on this blog and we find this disgusting. Nobody is hurting the Jews BUT the Jews in Israel:

And, lookie here: Pfizer CEO — Omicron Vaccine will be ready in 45 days…

45 days to a vaccine now. FORTY FIVE DAYS. No research. NO testing, NO nothing. Just take that shot you stupid sheep. Vaccines used to take 25 years. Now: Just mix together something that will kill off the populations.

I had to name it “Planet of the Apes” to get past the AI, censorship bots.

WSJ: Killing #Zionists – WSJ: #Israel, Most Vaxxed In The World, 50% Of Sick With Delta Are VACCINATED

I see the Jew-hating, Communist, Globalist filth made SURE to vaccinate the Israeli’s with the kill shot more than any other country. What are the long term effects? How many will survive this paralyzing shot? How will Israel be able to fight off enemies with the IDF inoculated???

TEL AVIV—About half of adults infected in an outbreak of the Delta variant of Covid-19 in Israel were fully inoculated with the Pfizer Inc. vaccine, prompting the government to reimpose an indoor mask requirement and other measures to contain the highly transmissible strain. @ WSJ

Read this synopsis also: In Israel, the most vaccinated country in the world, HALF of all new “delta” infections are occurring in “fully vaccinated” people

Ménage à Trois: Palestinians In USA Are Nazi’s. Neo-Nazi’s LOVE Them, As Do Leftists

Ive been saying this for many, many years on this blog: Nazis, Commie/Leftists and Palestinians are a f’ck buddy menage a trois. They will all unite in their sick love for Jew hatred.

LOVE OR HATE JEWS: MAKES NO DIFFERENCE TO ME.

BUT IN THE END…. YOU WILL BE FIGHTING GOD.

Go to ANY modern forum where Jew-haters are and you will see the Palestinians from Gaza, Ramallah, Chicago, NYC, etc making sweet talk with German first Nazi’s and Communist, America-hating troglodytes. The 3 are, in fact, a menage a trois.

In the end of time which I believe will be in our lifetime, these 3 aforementioned satanic groups will be the ones fighting Israel, true Christians and true religious Jews.

I just visited Gateway Pundit and there are the Nazi’s, fighting against the Christians, trying to persuade Christian people to hate all Jews and Israel, too. Beware Christians, these people will ‘wear you out’. I dont understand why people exist that just hate Jews. I realize there are big globalist/Communist/Left Jews that are evil…. But, to attack the average Joe Jew on the street is Christ like? HOW SO?

At any rate… pick your side. I will choose the Lord and Israel. I know that God loves all people but God plainly states in Zechariah 14 what he is going to do to the Israel haters and I BELIEVE it.

Parler, one of the lesser forums in the tech industry was shut down as you all know. Glen Greenwald weighs in: Click to read

No real reason for the destruction of Parler except for Trump signing up for an account there. And, as far as the Left is concerned, Trump and all his supporters are ‘white supremacists or nazis’ and must be expunged from society. Therefore, shut down their communications—Even though it is the Left that is doing what the Nazis did says *Dennis Prager, a Jewish man: Click to read. *Also: Under “Nazi/Hitler” Trump, We Had NO Gas Chambers, NO Camps, NO Yellow Stars: Dems Had TOTAL Freedom & Trump Supporters DIDN’T.

Before they purged Parler and the thousands of Conservatives from Social Media, they closed the nation down in a quarantine and GOP Governors were complicit. Why they closed down the nation over a virus used to stun me.. But, now I understand totally: Its ALL about POWER. It had nothing to do with the virus and everything to do with how people would accept Communist power in 2021. If a person didn’t wear a mask, they were shamed, ridiculed and humiliated. “Stay home” all over Facebook icons. Many Americans were FOR the shutdown not even thinking this was a nefarious plan but it is and was and I believe more shutdowns are in the works. People are already on the streets, starving….

So, they have come for your businesses and broke you. Then, they cut you off from communications. What’s next, people? YOU? ME? Yes, I believe if you do not bow to the bully, totalitarian, Commu-NAZI left…….YOU ARE NEXT and just WHAT will they do to you?

THE “ANTI FASCISTS” ARE THE FASCISTS.

And, the only reason they take down posts and purge you is because they hate themselves and do not want to see the truth about their authoritarian evil. Deal with it, Demon-Crats: YOU ARE EVIL. It is YOU doing what the Nazis did. YOU doing what the Communists did. Take a look at your ugly self or go to hell ‘cuz that’s where you murderers are going. Conservatives Leaving Twitter For Parler Is Making INSANE Communist/Leftists Foam At The Mouth

WORLD LEADERS DENOUNCE BIG TECH CENSORSHIP OF PRESIDENT DONALD TRUMP. (The Left does not care, though. Totalitarians NEVER EVER see how dangerous they are.)

Need proof of all of this? Hillary Clinton Labels Trump Supporters “Domestic Terrorists” Who Need to be Tracked and Surveilled Following Chaos at US Capitol.

Trump is NOT going to ‘save you’ The Swamp Swallowed Trump (I was no “ra ra ra” Trump person at all. He made me really angry because he didnt deal with the far left radicals, he allowed them to ‘eat his lunch’)

WordPress? ‘Our service allows anyone on the web to express their ideas and opinions”. IN VIOLATION OF THEIR OWN TERMS

“Whether we agree with them or not”. Yet, they are de-platforming Conservative Treehouse. For what? They hate the truth.

The “Anti fascists” are THE fascists, people. WordPress is violating their own terms in writing by de-platforming Conservative Treehouse

At WordPress.com, we’re committed to freedom of speech: our core mission is to democratize publishing. Our service allows anyone on the web to express their ideas and opinions, whether we agree with them or not — we don’t censor, moderate, or endorse the content of any site we host

On Sunday The Conservative Treehouse reported that they will need to find a new hosting provider.
WordPress kicked them out.

Yesterday, I had 88 visitors that had never been to this website. That was right after noon. It stayed at 88 all day long. Usually, its a lot more than that.

The ONLY Reason Dem “Jews” Are Obsessed With “Nazis” Is Bcz They’re Stinkin’ Communists.

The “Jewish” (actually ANTI Orthodox Jewish Left) is scared to death IF America turns super patriotic and nationalistic. Why? Because they know their repulsive, sickening, anus-sucking, baby-murdering, pedophile supporting ideals are NOT wanted by sane society. They scream “Nazi” at every chance they get because they KNOW their insane politics cause backlash.

In this case, the “Jewish” Democrats (Communist worshipers) have created this idiot video. Adding insult to injury. If ANYONE is ‘Nazi’, its Left Wing Jews. Anyone who supports the bully, fascist ‘antifa’ is a pro violent lunatic who should be deported.

We should re institute some old customs.….

What I don’t understand about this whole farce of an impeachment is your reluctance to reveal why you would not send aid to Ukraine.  I know why because I blogged about the Ukraine regime change from the get-go:

The fact is: Under former President Obama, our government armed Nazis in Ukraine.  Why you have left this in the dark is beyond me.  You have enough ammunition to bury the radical, treacherous Democrats—yet you don’t.

I, as an American grow weary from the complete lack of justice in your administration. Democrats AND many in the GOP have gotten a complete pass from you.  How long are you going to wait before you reveal these turncoats?  Justice is past time.  Hiding from the public how OUR government armed Nazis in Ukraine is repulsive.  Its past time to tell the truth.  Stop the impeachment farce, get on offense and start serving proper justice.

More videos on the US Govt arming Nazis in Ukraine: https://www.youtube.com/results?search_query=nazis+in+ukraine

Today, the Communist-Crat party says that it was ‘illegal’ for Trump to NOT send the Ukrainian Nazi’s our tax dollars.   Why are they so hung up on this?  You’d think they would not support Nazi-ism with all their crying about *us* being “Nazi”.    The Left has NO problem with ‘calling out’ Nazis in America, all 652 of them.    But, they have a YUGE problem when you ‘call them out’ for supplying them the Nazi’s arms.  They have a YUGE problem with Trump not giving the Junta in Ukraine OUR tax dollars.

Leftists are Totalitarian, Commie, Nazi, Islamic-Jihadist and thoroughly disgusting.  They call *us* Nazis as they arm and aid real Nazi’s.  Liars. Hypocrites.

Its all over the net…the usual phony outrage:

‘The U.S. Government Accountability Office released Thursday a decision finding that the White House’s Office of Management and Budget violated the law when it withheld military aid to Ukraine.’

*It’s a fact that most Americans do not even want to admit..the truth about Ukraine.  How our own tax dollars went to fund Neo Nazi’s and WE did.

*Even many Liberal sites eventually reported this, which shocked the hell out of me thru the B.O. admin, since they went to great lengths to protect Communist, Obama:

Although a few Liberal sites reported the truth about the Ukrainian Nazis.. The other sites hid the facts.

AND:  Who is that at the left side of Dead John McCain…Its DEMOCRAT Senator, Chris Murphy: 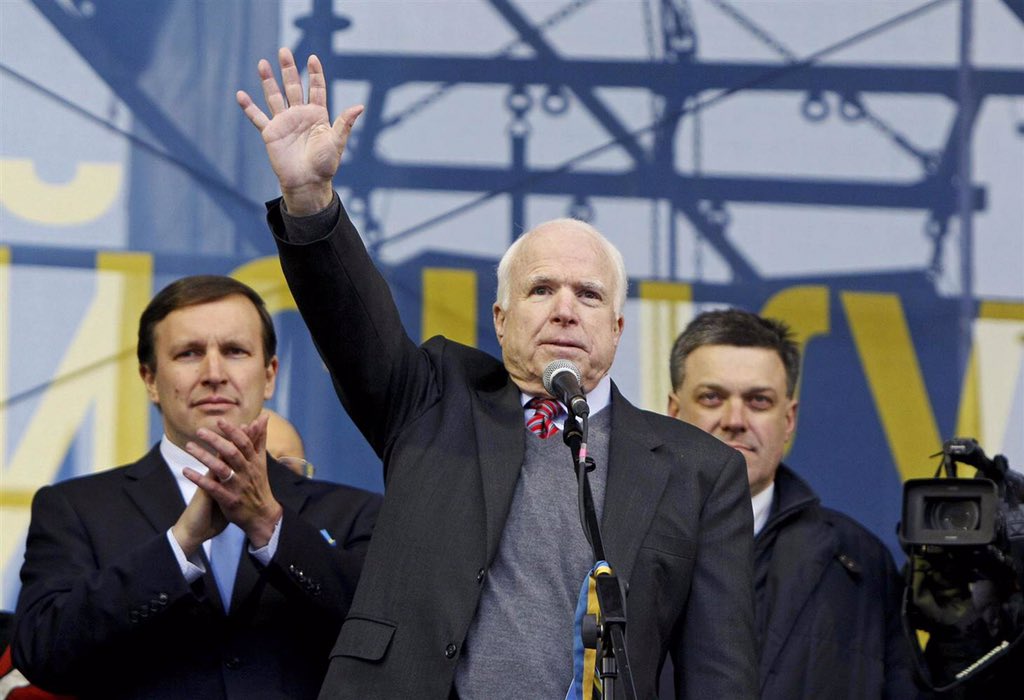 GOOD THAT TRUMP DID NOT SEND THESE BASTARDS $$.