NEW YORK PSA WARNS OF NUCLEAR WAR AND HOW TO PREPARE

There is no way to ‘prepare’ for a nuclear bomb. You’re dead.

The PSA Commercial is in this video: SEE HERE

There really is no survival if you are nuked.

N.Y. Nurse Testifies: Patients Not Dying Of Covid But Of Medical Malfeasance & Malpractice

I do not know where the rest of this video was uploaded, who the uploader is/was or exactly where this took place. That’s the problem many times but I don’t blame the ‘uploaders’. I blame the media for never reporting the truth. The media is supposed to be the professional.

Beating up and mugging this Asian model, was it because she held slaves 175 years ago in America?

Meet The Dude Who Puts Up Billboards Saying: “Making The #Taliban Great Again”

This is the Democrat party: Terrorists.

Is The NY Senate Passing A Covid Concentration Camp “Bill”?

BUT: This is what Leftists do when ya give em power. My suggestion is for NYers to get the hell out of NY. Who knows what else the Communist radicals have up their sleeve.

They will not stop until they are stopped and obliterated.  Understand? Totalitarians do not stop.  They just keep going until half of the population is murdered.  Statue removal is an outward sign that a totalitarian makes to the traditionalists.  It says ‘We are in charge now”.   It’s not about R E Lee or Schuyler.  It’s about cultural genocide:   Cultural genocide involves the eradication and destruction of cultural artifacts, such as books, artworks, and structures, and the suppression of cultural activities that do not conform to the destroyer’s notion of what is appropriate.

The Communists do not give a damn about who owned slaves or who didn’t own slaves as this is the argument these Left wing idiots are making.  With Communists, its only about Communism.

For the record, the Communist Democrat party:

Philip Schuyler began his military service during the French and Indian War as a captain and was later promoted to major. He partook in the battles of Lake George, Oswego River, Ticonderoga, and Fort Frontenac.  After his first stretch in the military, Schuyler ventured into politics. He began his tenure as a New York State Assemblyman in 1768 and served until 1775 when he was selected as a delegate to the second Continental Congress in May of that year. On June 19, 1775, he was commissioned as one of only four major generals in the Continental Army.

The story on this Communist lunacy: Albany.Gov 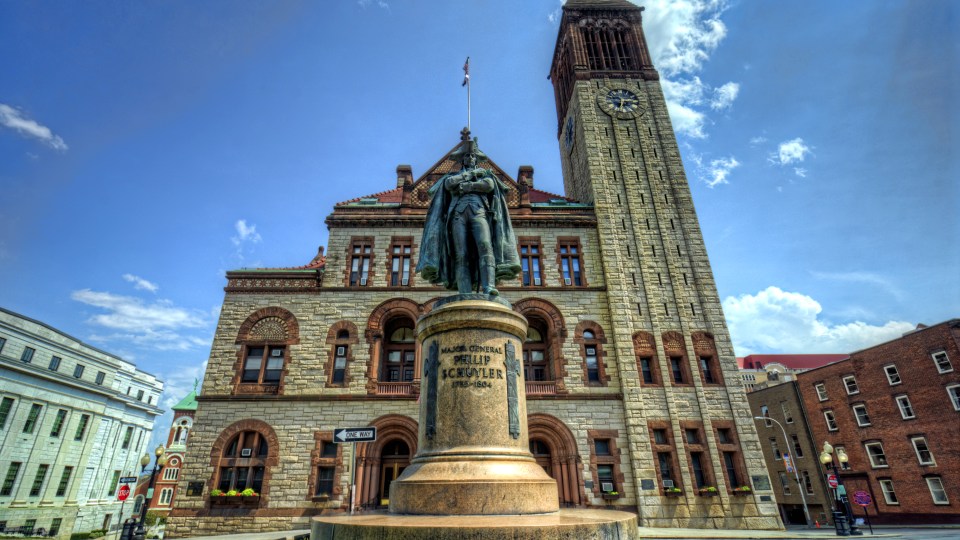 A serial, right-wing fascist gets in charge of the USA and is requiring ya’ all to pass background checks for guns.  (We have not ever had a right-wing fascist, BTW)  Admit that you would be going insane.   How is this ANY different?  Obama is a Communist, control freak and even his own lapdog media has said so:  NYT reporter calls Obama’s White House most ‘control-freak’ administration ever. …

So, it is OK for Obama to be a control freak and a Communist who wants gun-control but not OK for a right-wing fascist to do the same.  What have I always said?  Liberals are friggin nutz…

Treacheurous house up to no good….AGAIN:  http://www.conservative-daily.com/2014/05/29/urgent-house-gun-control-vote-imminent/   Representatives Peter King (R-NY) and Mike Thompson (D-CA) have drafted an amendment to an appropriations bill that would expand the background check system for gun purchases!

Peter King the Commie is leading the charge.. He looks like Heatmiser, btw:

DON’T EVER GIVE EM YOUR GUNS OR YOU’RE DEAD.