Obama is such a gasbag dictator, he can’t even come out and say: Yeah, you white devils, I screwed up the website, whatcha gonna do about it?!   Obama is just a weak putz.  Blaming Russia/Belarusia.  Ha.  IF Russia/Belarusia targeted anybody in the US govt, they would target  Victoria Nuland’s office. She is encouraging Ukrainians to commit acts of violence against Russia.

When I get up in the morning, I laugh at Obama.  Yes, I do. Because Obama is like a bad dog.  And, the way to stop a bad dog is to laugh at it, humiliate it.  Its awful to have more admiration for a Russian leader verses an American ‘Prez’, but that’s life, anymore for an American.

“U.S. intelligence is urging the Obama administration to check its new health care computer network for malicious software after learning that developers linked to the Belarusian government helped produce the website, raising fresh concerns that private data posted by millions of Americans could be compromised.  Read more: Here lol HAHAH, sure.”

Our problem is stinkin’ Obama, not Russia. (Although Obama would love to start WW3 with RU/China)

Read it all here:

See: Federal law says you can opt out of Obamacare, nor can you be penalized if you do

#GetTalking – The Idiotic Hashtag On Twitter For The Generation Y Jackasses

The “Get Talking” Hashtag is for college students returning home for the holidays. The Obama’s invented it to talk about health insurance at the dinner table.  I have a different take for these rotten morons:

#GetTalking, college students about….how delighted you are in never growing up, believing that no one over 35 years old knows anything while you know everything.  #GetTalking about how you will ‘mooch off Mommy’ ’til the day of your death.  #Get Talking about how you are disrespectful, unrighteous, unholy, debaucherous and downright disgusting compared to your grandparents who sacrificed everything in order to give you rotten jerks a better life than they had.

#GetTalking about how you are brainwashed small-minded Lilliputians who voted in ‘Yes We Can”, “Hope” & “Change”, thus screwing your country for a thousand years.

#GetTalking about how you suck, ROYALLY.

What can you expect?  Seems that everything Obama touches turns to mush…

Don’t get angry, Liberals, when your insurance company goes bankrupt.  You’ll only have yourself to blame.  Communism is not going to work in a country that has been capitalistic since it’s inception.   If we all wanted to take care of the poor, we might have all lent more helping hands to synagogues and churches.  Dr’s could have more compassion.  Nurses as well.  That would be the most effective way to care for the sick.

Don’t put this on Twitter, they just may suspend you.  We’ll all find out how bad it is–very soon.

A Republican state senator from North Carolina thinks that extending health care to all Americans is worse than genocide, communism and terrorism – combined.

Obama is a fascist.  It’s quite unbelievable that Obama does worse than Bush and even the same as Bush but the ‘liberals’ do not say much.  It’s because they are totalitarians.

See the post at the Mad Jewess hating website, “The Daily Caller” (They hate me, banned me as many sites do to me because they despise the truth)

So, Whats Issa Going To Do Being That Sebelius Obstructed Justice??

More smoke and mirrors.  Talk, talk and talk some more. Do a tap dance and give we the people the old razzle dazzle ’em bullsht…

Ohio Folks Unhappy With ObamaCare.  They “Can’t Afford It!” But, But-Obama Said It Was FREE!

Everybody wants a free ride. This is why Obama won Ohio–false promises.

What a tangled web we weave when first we practice to deceive.. Obama lied to so many people.  He toyed with their HEALTH.  These elders can’t afford his Communist medicine.  We tried to tell you folks, , but you just called us racists. This is what happens when a people trust in man for everything: FAILURE.

God never fails, give HIM a chance….

Well, this is all I have to say about this:

ObamaCare Alert~Dept Of V.A. Letter: If You’re NOT Insured, Your Fine Will More Than Double Each Year  (My friend received this letter from the VA)

I have talked to many people that just cannot afford insurance at all.  They cannot afford $30. month and use Doctors on duty or Urgent care when they get very sick.  Obama led people to believe that Obamacare would have a $95- all time fine.   Not true.  Your fine (Based on income) will go up from $95 the first year to $325 in 2015 to $695 in 2016 according to the below scale.   Here is the letter you can use to measure: 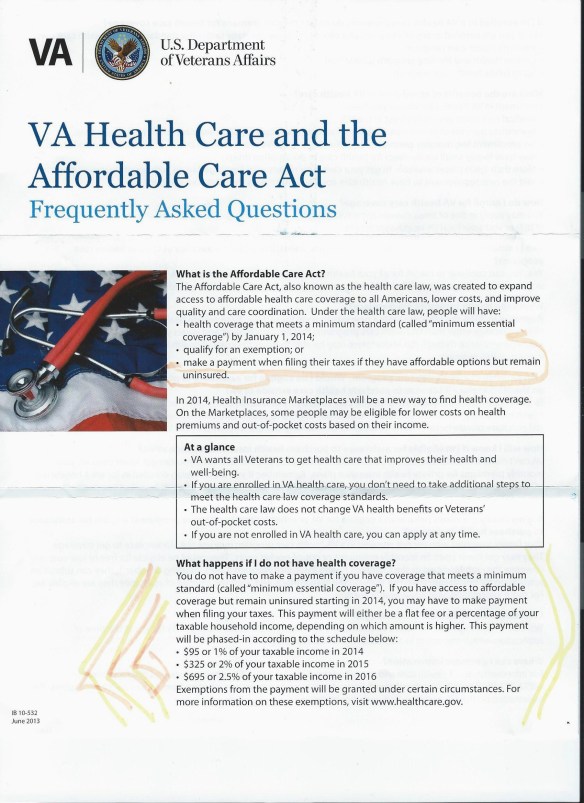 Click on the picture for a bigger photo image.

No wonder the Commies are desperate and using the Iranian mess:  ObamaCan’tCare is the worse SNAFU of the century.  Good going once again, Leftists.. Chalk one up for ya all dumping on the middle class. 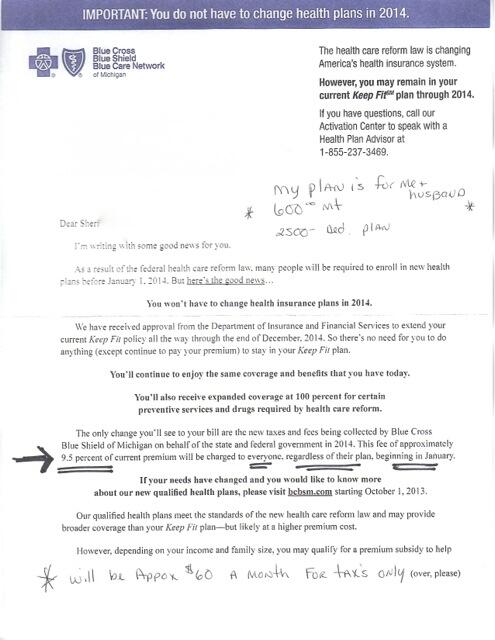 This should be the song Cruz, Paul or God forbid, Christie should play at the campaign if we even have an election in 2016 about Obama: