This is how you fight Muslim savages, everywhere.  You kick Muslim ass, you don’t kiss it as we do in this decayed country.

Russians don’t play games with Islam.  America puts a Muslim in the White House.  Bill O’Reilly thinks Barack Hussein Obama is a Christian.  And, people wonder if America is finished??

Madonna’s daughter, Lourdes ‘eager to move out’.  How can you blame her?  Madonna is a big, fat hypocrite. Can you imagine your own mother being 54 years old, telling audiences that she will ‘get naked’ if a certain president gets into office, again?  Not only that..Madonna is super strict with her daughter.  The slut who is rumored to have had 4 abortions is strict with her daughter who was caught smoking. Lourdes is better off with her father.

THAT BE AMERI’KA, NOW FOLKS.

NO MORALS AND ZERO STANDARDS. 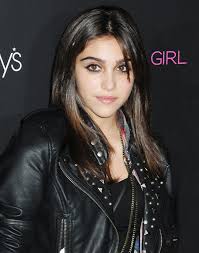 The bitch loves the black Muslim in the white house, but,  Madonna drops ‘terror bride’ dress as not to offend the ‘peaceful’ Muslims..When the Sharia comes, we will demand she bows first…Really..this is Asshattery at its absolute finest..

Sometimes I hope that America falls to Islam & women that are ‘feminists’ are forced to bow to allah, the moon devil..

The radical, far-left is in charge and they stop at nothing to brainwash your young girls/women.  I was at the YMCA today, and I opened up Mullah-friendly Marie Claire Mag…And here it is.  A HUGE 2 pg spread showing women that are ‘praying’ in their Burka’s.

Now, please understand…It is none of my business what these people do in their own countries.  However, when it inflicts itself all over magazines that young women read, in my country– then I have a serious issue.  It is totally evident that Marie Claire does not know a friggin thing about what women go through in these Muslim countries.  And, even more ludicrous, is that Marie Claire prides itself on being ‘feminist’.   *Puke, barf, vomit.*

Imagine thousands of Christians praying…Just how would the left-wing react to that? Or thousands of Jews praying?

The left HATES God.  Which is why they LOVE Islam, because Islam is God LESS.

TAKE YOUR FEMINISM AND SHOVE IT UP YOUR A$$.

DO NOT COPY AND PASTE, LINK ME. USE ONE OF THE PHOTOS. I like visitors, too!

SEE!! You can’t say a thing about Mohammed! Who is a DEAD man!   They are not a ‘minority’!!  They are the MAJORITY and still can’t take any criticism of their f’cked up ‘g’od!

I don’t care..you can call me any damned name you want.  I dont give a rats ass.  Yesterday I had a really nasty pu$$y for Sharia here.  He was a Jew-hater...I lived!

You can go to Youtube and there are millions of vids that are totally Jew hating.  And plenty that are Christian hating–we live!  We go on with our lives..Not these MuZZies! They are little pu$$ies, just like I said!

And shut up, I will say what I friggin want.

ALL Americans continuing to reside in the US should fear barndoor ass Naps.

Naps had to answer a few questions in front of the House Homeland Security Committee chaired by Rep. Peter King.

She was asked about the issuing of a state department visa to a member of an organization officially designated as a terrorist group, one Hani Nour Eldin.

What was the State Department doing giving Eldin a visa? Why wasn’t this run by Congress for its approval first, as U.S. law demands?

Napolitano’s response? Expect more of the same, and like it.
“I think you are right in pointing out that as we move forward we are going to continue to have visitors to this country that the State Department and others feel are useful to bring to the country to have discussions moving forward who say they are members of the political party that in the past have been so designated,” Napolitano told House Homeland Security Committee chairman Pete King, R-N.Y. during a committee hearing this morning.

“I think we have to add more nuance to that,” she said when King mentioned that Eldin is part of a designated foreign terrorist organization. “We have to know what the group was. Is it now a political party that is running the government of a country that has strong ties to the United States?” She added that he went through three stages of vetting and “everyone who looked at this person felt confident that he was not a security risk to the White House or to the United States.”

As far as her addressing King’s legitimate question about why Congress was left out of the loop?

The Obama Administration simply wanted Eldin in so they could receive his message from he Muslim Brotherhood, so they let him in and brought him to the White House.

Like Hitlery rolled out the red carpet for the grandson (Tariq Ramdan) of the Muslim Brotherhood founder. Tariq was banned by the Bush administration.

Happy sharia days America. Its Obama’s hopey & changey for you. And learn to love it.

Obama is an everday disaster. His wag the dog moment in Egypt-failed.  Everyone in EU knows this, everyone in the ‘sane’ Arab world knows this. But our Dictator, wannabe -tyrant acts like he does not know….but WE ALL know that when the winds went in an ugly direction, O would side with the Muslims; Who would have ever thought he would side with the Muslim Brotherhood, the same Bros that were the Egyptian brotherhood, who were responsible for bombing the WTC 1993? Obama IS A TERRORIST. PERIOD. Ya all drank the Kool aid and were happy. Will you be happy when something terrible hits America in YOUR neighborhood, you stupid asses??

BTW: In the end with you terrorist enablers that are atheist;

YOU WILL BOW TO THIS SATANIC ‘RELIGION’ IN THE END. God is NOT mocked by you.

Keep thinking that Islam is not a problem, just not an issue.  With a government out of control.. It is very possible that America could become a lot like UK, Netherlands, Holland, Spain, and much of EU with Islam becoming a hotbed for Islam-extremism.

This blog does not talk a lot about Islam, because we believe that government is the problem, but our government and the MSM seems to cater to Islam and Marxism/Nazi-ism now.   This is getting dangerous, people. WAKE UP.

Watch this video below, it will shock you, and if it doesn’t, then you are an IDIOT.  Home-Schooling is the only option at this point, imo.

About Constitutional Emergency
This effort is focused on sacrifice to protect and defend the Constitution of the United States against all enemies foreign and domestic.
0.000000
0.000000

These shocking scenes were emailed to me by Pastor Mark Harding, who was arrested in Canada for hurting the poor Muslims feelings. This is what the liberal, Jihad-loving monsters are asking Americans, now ~ to TOLERATE.

You all really think this crap is not taking over, all over this world?? You had better watch this video, and stop the nonsense of thinking this is a ‘peaceful’ religion.  Just a question to you Moslems and Moslem lovers:

The Hebrew GOD is the God of Abraham, Isaac & Jacob, of the Holy Bible. HE is the only GOD.  Moslems ALWAYS say that their ‘g’od is the same as the Hebrew & Christian God.

Tell me then, for I wish to know, Dear Muslim people….If your ‘g’od is the same GOD, why do you demand that Jews and Christians convert to Islam?

One does not need to convert to God, if they already believe in HIM. The answer is plain…. Your ‘g’od is foreign and an idol, totally domineering, and from what I can personally see, is very turned off by any women as seen in these few pictures.  You must go to this Russian website to see the rest- this is scary, and liberals are WITH this ‘religion’ but against Christians and Jews.. Liberals, imo, are NAZI-like with their tolerance for power through the Muslims and their love for evil.

Federal officials are investigating a fire that started overnight at the site of a new Islamic center in a Nashville suburb.  The rest: http://www.cbsnews.com/stories/2010/08/28/national/main6814690.shtml

EXCERPT: Ben Goodwin of the Rutherford County Sheriff’s Department confirmed to CBS Affiliate WTVF that the fire, which burned construction equipment at the future site of the Islamic Center of Murfreesboro, is being ruled as arson.

Special Agent Andy Anderson of the federal Bureau of Alcohol, Tobacco, Firearms and Explosives told CBS News that the fire destroyed one piece of construction equipment and damaged three others. Gas was poured over the equipment to start the fire, Anderson said.

I dont like to see this happening anywhere…but what can people expect?  Huh?  Synagogues have had hits and Moslem mosques have had hits. Why? Nobody asks WHY.  Because left-wing “Jews”, ‘liberals’ and Moslems are seeking to destroy this nation which is CHRISTIAN. Thats why.

These type acts will continue until the leftists in America straighten out. Sorry, people, thats life. Deal with it. We have become a nation of a bunch of pussies, that tolerate every evil under the sun. And now the ‘tolerence’ with the G. Zero mosque and left wing Jewry (Bloomberg, Nadler & Weiner) has pushed America too far.  Better wake up anti-American Moslems Jews, & left-wing idiots- before it gets physical.

See Bare Naked Islam, the wife of a Marine– see HER thoughts on this filthy maggot: Follow the money: SHARI’A FINANCE is why Bloomberg is in bed with radical Islamists &

Who would have thought, that not even 10 years after the worst attack on our soil, we would have to fight an enemy within, so ferocious and murderous that money would come before people? People that went through such horror, pain and misery that it is totally unfathomable.  I didnt lose any friends or family, and I didn’t live IN the city, but I felt the pain, the depression, the end of laughter. How could this beast do this? I am sorry, this filth should just die and go to hell where he belongs.

Bloomberg, on his knees where he belongs, begging for mercy before we nevermind.