Whites still not armed.  It’s not only Obama’s sons, now its his daughters:

Run for cover and get armed, white people.

#WHITEPRIVILEGE: Black Knocks White Female Out With A Bat At Walmart, He “Felt Like It”

Black attacks on whites are getting even more vicious.  White people; this is a call to arms, arm yourselves.  Never mind the law in your area, Obama doesn’t follow it, why should you.

Violent black female beats white unmercifully and the only one who came to her defense was her little boy:  Black McDonald’s employee brutally beats white woman

(Is what they’re learning at home)

#WhitePrivilege: Son Of Obama Murdered A US Marine. Another Beats White Woman With A Bat

I post racial crimes perpetrated against white people once a week.   Some of our friends claim we are haters for doing so.  But, who is the real hater?  David Ben Moshe who is reporting this?  Or the blacks who are robbing, raping, beating and murdering white people for the hell of it?

Obama’s children are being taught at a really young age to hate white people.  To beat them.  Much like the Hitler youth in NAZI Germany, who beat Jews for no reason, other than being Jewish.

In this video, this young, black girl is beating this white girl purely for the fun:

If this was a black girl getting beat it would have national news coverage for at least a week. In the U.S. it is OK to be racist against whites though.

Tormenting a Jew in Rzeszów, Poland

Whites in America are being made to suffer for the 1860’s and the 1960’s, that is what leftism has brought you.  THIS generation and the last generation must pay for the crimes of their Grandparents.   American people:  You will not only lose most of your Constitutional rights, you will eventually have to grasp the fact that ALL of you will have to march on DC and in your cities just to be treated human.  You will have to march against the black oppressors.

While the lesbian, Obama’s interior secretary Sally Jewell is blaming Cliven Bundy for the Neo-Nazi killers in Vegas, Obama’s Negro, savage sons are murdering and beating white people at random all across the country.  But, you’ll never hear a word because blacks are not racists.  Dey just be misunderstood, yo.

The families of these victims have our daven/prayers.

Putting this Nigga in prison is too good, he should be lynched.  If the races were reversed, it would be front page news. Although white men don’t go out of their way to rape black women.

#WhitePrivilege: Son Of Obama Murders Beautiful White Woman. Other Ones “Knock Out” White Teen With Autism

A few days cannot pass by without Obama’s rotten sons murdering whites or ‘knocking out’ white teens.  If these crimes were in reverse, it would be front page news.

Victim: Lauren Bach, 24-year old white female of the 5400 block of Rosa. Suspect: 42-year old black male. The victim had sustained trauma to the head, neck and had lacerations on her hands and human bite marks to the neck and back.

Not only do they beat whites, they bite them–eventually murdering their victims.  Prayers/Daven for the family of Lauren Bach.

Whites are still not armed.  They are not armed because they believe they are guilty for slavery.

Websites still refuse to show what Obama’s rotten sons do out of fear of being called a racist.  Who is the real racist?  Those who report these racial crimes or the perpetrators of these hate crimes??  Daven/Prayers for the victim’s families.

Our thoughts/daven/prayers are with the family.

Isn’t it great to be privileged?  Our white privilege gets us robbed and beaten by Obama’s savage sons.  Blacks never had it as good as we do.

Here is her picture: 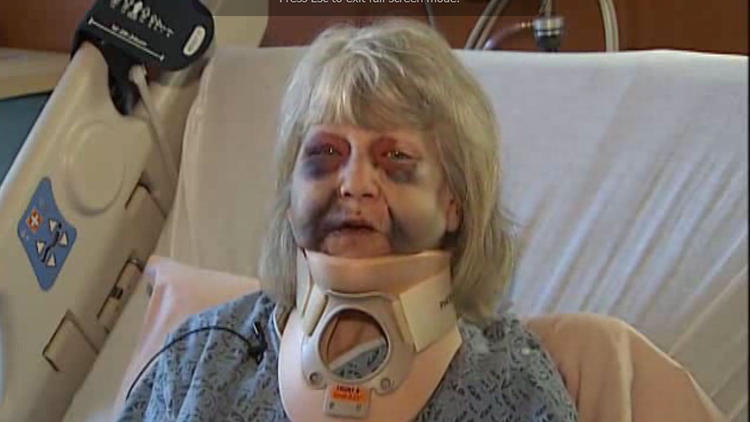 This is what happens to white people in America who are privileged.