Our sissy-boy, el Presidente’ is very, very angry with Uganda because they don’t want militant homosexuals turning their poor country into a freaky, gay-land like America.  Obama will probably threaten to cut off their foreign aid.  Good.  Uganda should say “Fine”, we would rather be poor than be pussies like many American men.

These Africans hate Obama.  They are not stupid idiots like black, Liberal Americans.

1. Making sure they say all the right things TO Communist ‘liberals’.  In fact, ‘conservatives’ are 100% more ‘politically correct’ than the Communists.

2. You call COMMUNISTS: “Libtards”, Progressives or Liberals.  You refuse to name this enemy within. Commies are scared to death of being named and you oblige them.   So, the result is that the enemy within has NO fear of you at all.  They are not ‘libtards’, they are dangerous humans who would like to murder you.  They are Communists & potential terrorists. We are in serious danger with big military brass being purged…And you call Communists ‘libtards.’  I just have no hope.  Go learn to fight.

3. ‘Conservatives’ constantly speak from a losers point of view. Like a victim.

4.  You ban and ostracize people who are stronger than you and give yourselves a platform.   You have NO unity.  You have Ann Coulter who spoke for GOProud, wanted Chris Christie for Pres. You have Bill O’Reilly, who often shuts up conservative voices and kisses Obama’s ass & is for illegal occupiers.  You have Beck and Malkin who called ‘birthers’ a circus.

These are some of the things that keep Democrats in power.  Your refusal to take courage and call an enemy by its name.  The end result is disastrous for all of us because of your weakness.  You hate me & hard core patriots like me because you wish you had courage, but don’t.  Shame on you.  You make your grandparents/parents sick. 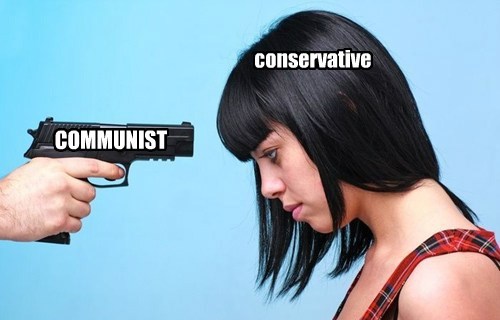 And the GOP will go along to get along.  So, not only do we have to put up with militant sodomite queers that act worse than a woman on her 2nd day of menstruation… Now we will have illegal, faggoty men stool-pushing their way  though Hussein Obama’s crash-course in amnesty.  Who ever knew that so many black people were pro-queen and ‘gay’ marriage?  How could a black minister have ever voted for this raunchy insanity?  I wonder how this makes Hispanics feel who came here the right way.. They get to wait in line while stool-pushing queers move right along.  Its a satanic/leftist world.

Here is the insanity (which I am hoping is untruth, but I doubt it. ameriKa is Sodom, now.)
`
You really believe that God is ‘blessing’ America?  Any other country would have been in sackcloth and ashes long ago.
`

….Is my opinion of last nights masquerade at the RNC brigade of idiocy in Tampa, FL.  I am sick and tired of cowardice.  Can the GOP be any more stupid than they already are?  Willingly, they are enabling a Marxist psychopath with Obama.  Obedient to the leftist MSM, they didn’t even address the issue of Obamas executive orders, let alone their own e.o.’s that they shoved down our throats during Bush’s reign of dumbass.  Obama, whose executive orders are so treacherous and anti-Constitutional, these blowhards casually left out of their dog-n-pony show speeches.  I believe 100%,  that the GOP sucks even worse than the DEMS because they are like the American Churches that will Sing As The Trains Are Going By, which  I wrote about the other day. READ IT!!!

Nothing about the 19 African Newspaper Sources, Plus Obama’s own 1991 Pamphlet (that HE submitted) that Says Obama Was “BORN IN KENYA” and is not eligible to be president because his father was never a citizen of the united states of AmeriKa.  Nothing about Obama’s records.  They have all the ammunition, yet use none of it–the same way they have done our troops for decades.

I am completely and thoroughly disgusted.  These people have NO courage: too afraid to be called racists if they bring up the foreign usurpers birth certificate issue.    Andrew Breitbart was murdered for his defiance in the face of this liberal fascism  These weak, knee-jerks couldn’t  even muster up the strength in one large room to lam-bast Obama and his Stalinism.

I thank GOD everyday that I am not with the GOP, anymore.  The DEM is traitorous enough, but these sonofabitches enable them, which is even worse in my opinion.

No repentance, just the same old song and dance.

Its coming, you rat bastards.

Did you all see the windbag, Boehner making nicey-nice with the evil imposter at the SOTU?  What a weak, pathetic, excuse for a human.  He makes me sick. So, I have dedicated a post to this knee-jerked jackass. NO wonder the left is so strong, hateful and nasty.  Look at Boehner-he makes you want to attack.  Republicans (if you still are a Repub) You should feel ashamed.  This is despicible.  You can’t count on cowardly.

The putrid legacy Carl Rove, “The Architect,” he of the non-confrontational rules of engagement with the raging Commie left, the one whose policies resulted in mass repudiation of Republican politicians and  the Republican party smoldering on the trash heap heap, lives on…The first time Palin attacked Obomo during the campaign, the next morning she was severely criticized by McCain who spent the next months  throwing her under the bus….
And the stench hasn’t gone away as the RINO skunks join the Communist attacking the ‘racist, radical right wing’, Tea Party…And this morning, so-called conservative writer Mark Halperin admonished Republicans for opposing the Mosque in NY – God forbid! don’t make the Muslims mad!…
Don’t make the liberals mad, ditto blacks, Mexicans, Lesbians,  fags. G-o-d forbid, don’t make women mad….But white Christian Conservative America, and Christian white guys….keep dumping on them, not a problem….
By DB© 2010  http://thelampoonist-american.com/