4 More Youths Shot In Rahm Emmanuel’s Chicago Land.  This is what Chicago gets for putting in a left-wing kike like Emmanuel.  We have been posting on the violence in Chicago for at least 2 mos.  Finally the media is now picking up on it?? You will find the truth here from me, QV and TMJ.  You may not like it, but we will tell the truth.

CHICAGO (CBS) July 11, 2012 — Four youngsters are among the latest victims caught in Chicago’s gun violence epidemic, including two middle school-aged girls who were wounded in a neighborhood park on the Far South Side.

As CBS 2’s Susanna Song reports, it was a typical evening for Nakia Turner, 12, and Tishona Polk, 13, as they played in Cooper Park, at 117th and Ada streets on the cusp of the Morgan Park and West Pullman neighborhoods.

Suddenly around 7:45 p.m., shots rang out, and both girls were hit.

UNBELIEVABLE! Detroit Police Search For A 10-Year-Old Carjacker (Just More Liberalsim)… That’s America, folks.  In the cities, this is America.  This is what the LIBERALS have created.   Liberals must be deported or sent to an island with straight-jackets so they are not allowed to reproduce.

Liberals are the IDIOTS that do not want parents disciplining their children.  Remember this.  Liberals, in fact, hate children so much, they murder them before they are born.   LIBERALISM is the cancer that must be purged.   With no more liberals, we will have no more 10 year old car-jackers.   Nuf Sed. 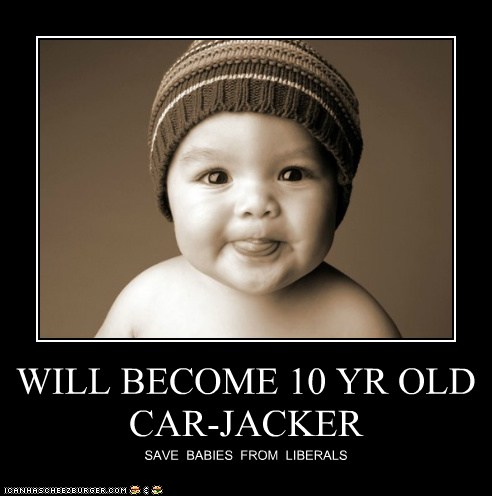 This ‘event’ occurred on June 18.   DRUDGE reads The Mad Jewess, not the vc versa.)

***Dear readers:  We have to allow this stuff so people don’t think whites are discriminating. It’s better to watch the world burn than be called a racist.