Whites In South Africa Are In More Danger Now Than Ever. STOP THE GENOCIDE AGAINST WHITE MINORITY

I don’t even know what to do.  It is evident that some of us are going to have to raise money, go to S.A., whatever it takes to end this murder. I just do not know how to organize this type thing.

These posts on Facebook, Twitter, make it clear that the blacks in South Africa want to murder off all of the whites.    We ALL need to plead with God to destroy these racist blacks.  “End of apartheid?”  My ass. 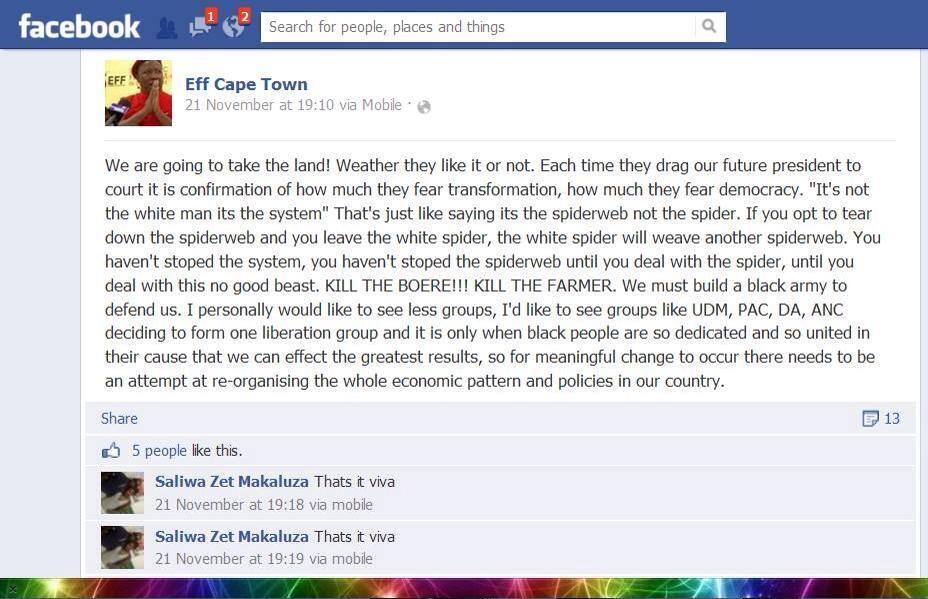 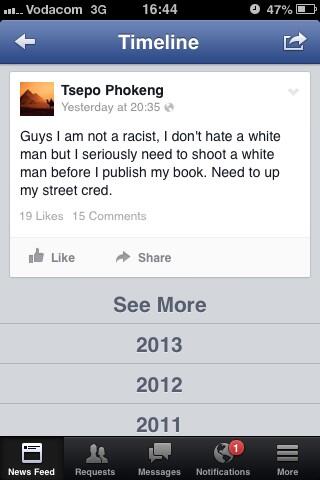 Its been so out of control in America with Obama’s evil sons that I have long forgotten South Africa.  We have to make this a serious, #1 issue. I cannot stand people suffering this way.  I cannot even keep up with this present evil. Its everywhere.

FL#BlackPrivilege: Son Of Obama Murders His Pretty, White Girlfriend, Dumped Her In The Lake

If she had stayed with someone of her own color, this would not have happened. Black women don’t take sass from black men.

Accused murderer: Khambrel Hadley allegedly confessed to murdering girlfriend Alyssa Oakes and dumping her body in a wooded area near a lake

You can say anything racist about a white person.  You can even call for the murder of white people and they babies.  Blacks murder, rape and rob white people on a daily basis and thats OK.  Its open season on the white man.  Why is it that the only racism is against black people?   I have been a victim of serious racism; beaten, robbed, a family member raped and its all OK.

Racism is racism. Black on white, white on black.  It is a subject close to my heart because I have been a victim and have seen the injustice.  But, I guess whites deserve it for 140 plus years ago with slavery n all… Whatever. My family didn’t own slaves.  Now, the white is the slave to the black Gestapo in the White House.  Enjoy Yo’MeriKa.

Bob is too right.…

This is OBAMA hate-filled, racist against ‘evil’ whitey AmeriKa.

Below is a “Kill Whitey” video.  White people are being murdered everyday, and I suspect there is most definitely a conspiracy to kill the white race, which is what multiculturalism is all about; MURDERING off the white race.

http://timvalentine.wordpress.com/2009/08/29/whoismyneighbor/ <<Tim, you might START by STOPPING JUDGING people and calling them “RACISTS” just because we cannot stand HUSSEIN Obama.

We DO NOT like him because he is an UN-REPENTANT REPROBATE, who YOU chose BEFORE God, you’ll pay for this, TIM—BOY!

OBAMA HAS NOT, I repeat NOT EVER shown a LONG FORM BIRTH CERTIFICATE, and he ONLY gets a FREE pass, because he’s BLACK, and that’s a FACT!!

WND has NOT reported ANY LONG FORM B.C.–monster-TIM!!!

And I WISH I could call YOU the “N” word, but I am ABOVE that shit, you intolerant MORON, so, calling you BOY, is GOOD enough, b/c YOU ACT LIKE A BOY!

Hey little schmuck…just where the hell do you think you got your rights from CHUMP?!?

The JEWS, and boy, just look at YOUR WEBSITE, FILLED with WHITE-HATE…GO to AFRICA, Tim.

In fact, if it was not for us DUMB Jews that did this, you would be NOTHING, and you shut out MY FREE SPEECH!?

“African-Americans” were NEVER meant to ‘rule’ it over AMERICA. Why? Look at your loyalties, dear BOY.

You are an AFRICAN FIRSTER. A BLACK-firster, never just an AMERICAN, but every other label, BUT AMERICAN.

So, you shut out MY free speech and I am a JEW amongst the DUMMIES that GAVE you FREE SPEECH, who the HELL do you think fought for you, asswipe, to be able to have the same RIGHTS as all Americans???  STUPID Jews did.

THIS is where YOU would have been still if it wasn’t for us DUMBASS JEWS. HOW STUPID WE ARE!! NO WONDER everyone HATES our GUTS! Thanks a LOT AHOLE:

YOU WOULD BE NOTHING IF IT WASNT FOR STUPID DUMBASS LIBERAL JEWISH MONSTERS!

Of course there is massive amounts of white-guilt in the Demo-kkk.

The Dem party and the liberals are DEEP SEEDED in roots of racism that is UNFATHOMABLE. Many Americans are breaking loose of the binding ties that Dems are putting on America by calling us ‘racists.’ Yes we are THROWING those chains that the REAL racists/DEMS are calling us.

Many people I know, inc. myself;  racism and religious hate was absolutely forbidden (I grew up in a Jewish home), and for this reason, minorities were above reproach..well, now, the Thief in Chief WANTED us to discuss racism in America, and now that we are, the DEM as USUAL, cry FOUL!!!

We are NOT ‘allowed’ to criticize the blacks, the Mexicans, etc. If we feel they ARE in fact, acting sub-human, like recent with a black man having sex with a horse…  We are RACISTS ??.. its OLD. Or, if a Mexican has committed a drive-by, NO CRITICIZING!!!. You can see for yourself online, or order reports of VIOLENT crimes; 68% of Violent crimes are, in FACT committed by black Americans. NOT ‘evil whitey.’

Well, lets look at some FACTS.

Planned Parenthoods-Margaret Sanger, was a KKK member, this is fact, I posted it before. She wanted to rid America of the black polulace, so what did she do? She advocated abortion, she has managed to slaughter 13 million black babies, this is a FACT.. Sen. Byrd also a KKK member. Boxer recently told the national head of the Black Chamber of Commerce that basically his opinion didnt matter, if he wasn’t with the NAACP, belittled him, and treated him like trash.  They are not ‘racists’ if you AGREE with their politics. Hillary Clinton known SEVERAL times to call Jews the G’D Jews.  No, they aren’t racists.. Rev J. Wright…”THE WHITE MAN!” no, no racism.. Obamas “TYPICAL WHITE GRANDMOTHER” no, no racism there..

As far as the GOP being racist, well, WHY did Bush appoint Powell and Condaleesa Rice, he also had a Hispanic man as HIS attny general, and the DEMS slaughtered him… racism.. of the dems is obvious.

FACT, history proves that without a convicting strong force of God, and ethics, a “Leopard cannot change its spots.”

The reason that the democrats attack the republicans, is because it is PROJECTING their minds, and evil hearts, they are, in FACT, the real racists- now they are deeply racist against the ‘evil whitey’.

FACT: M.L.K. was a REPUBLICAN.

FACT: LINCOLN WAS A REPUBLICAN.

FACT: The term Republican was adopted in 1792 by supporters of Thomas Jefferson, who favoured a decentralized government with limited powers.

FACT:  The Republicans nominated John C. Frémont on a platform that called on Congress to abolish slavery.

FACT: The Republican Party also played a leading role in securing women the right to vote. In 1896, Republicans were the first major party to favor women’s suffrage. When the 19th Amendment finally was added to the Constitution, 26 of 36 state legislatures that had voted to ratify it were under Republican control. The first woman elected to Congress was a Republican, Jeanette Rankin from Montana in 1917.

FACT: The Republican Party was born in the early 1850’s by anti-slavery activists and individuals who believed that government should grant western lands to settlers free of charge. The first informal meeting of the party took place in Ripon, Wisconsin, a small town northwest of Milwaukee. The first official Republican meeting took place on July 6th, 1854 in Jackson, Michigan. The name “Republican” was chosen because it alluded to equality and reminded individuals of Thomas Jefferson’s Republican Party. At the Jackson convention, the new party adopted a platform and nominated candidates for office in Michigan.

FACT: The Republican Party was the vanguard in relation to women. In 1917, Jeannette Rankin, a Montana Republican, became the first woman to serve in the House.

(I personally don’t like women in power, of course, look at Boxer, Feinstein, Piglosi, Clinton)

Duh. NOBODY likes these pigs., NOBODY.